The annual Northeast Dairy Farm Summary (DFS) is a unique project within the dairy industry. It compiles actual financial results from a cross-section of dairy farms across New England, New York and New Jersey. A collaboration between Farm Credit East and Yankee Farm Credit, this year’s edition summarizes the results of more than 450 dairy farms of all sizes, from across the region.

Northeast dairy producers have faced falling milk prices for two years in a row. Since October 2014, milk prices have declined sharply, falling from an average of $25.58 per hundredweight (cwt.) in 2014, to $18.24 in 2015, and to $16.85 in 2016. Nonetheless, Northeast dairy producers have shown remarkable resilience in the face of falling revenues. Despite milk prices that averaged $1.39 per cwt. lower, farms managed to post slightly higher earnings in 2016 than the year before. 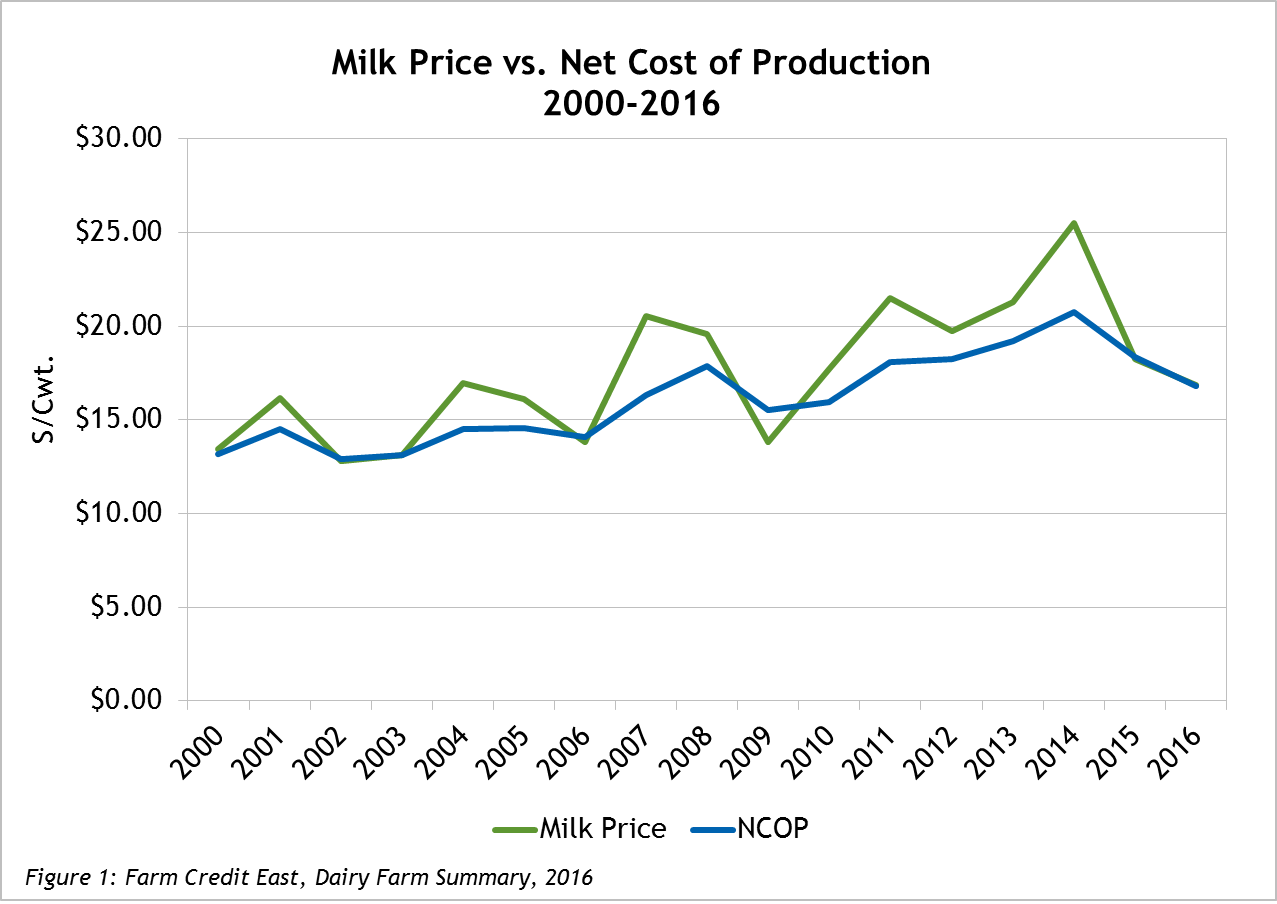 Average net earnings increased from a loss of $30 per cow in 2015 (not counting nonfarm income), to a net gain of $15 per cow in 2016; a remarkable achievement, given the lower milk price. This brings the five-year average earnings to $383 per cow, a figure strongly influenced by the strong returns in 2014. In 2016, many producers were able to cut expenses significantly, which helped them avoid or reduce losses. Several expense line items declined, including feed costs, fuel, crop inputs, and repairs and maintenance.

In addition to lower costs, the small increase in average net earnings was also due in part to increased per-cow productivity. Milk price received declined by $1.39 per cwt., however, net cost of production decreased as well, by $1.57 per cwt. to $16.79. The modest earnings on milk production, combined with non-milk farm income to yield slightly-above-breakeven earnings of six cents per cwt. for the average DFS farm. In the 38 years of the DFS, 2016 milk prices ranked 33 when adjusted for inflation.

A decline in feed commodities and energy costs helped dairy producers cut costs. In addition to these market impacts, farmers made significant efficiency gains and managed to trim discretionary spending, such that they were able to reduce cash operating expenses by 8.8 percent over the prior year.

While the average farm was able to post modest gains of six cents per cwt. on an accrual earnings basis, cash flow was generally insufficient to meet cash requirements for the second year in a row. When family living expenses and scheduled debt service payments are taken into account, the average farm was short 10 cents per cwt. in 2016, following a nine cent per cwt. shortfall in 2015.

Many farmers took on additional debt or restructured existing debt obligations to bridge the gap, resulting in total liabilities per cow increasing from $3,335 in 2014 to $4,190 in 2016, an increase of more than 25 percent in two years. 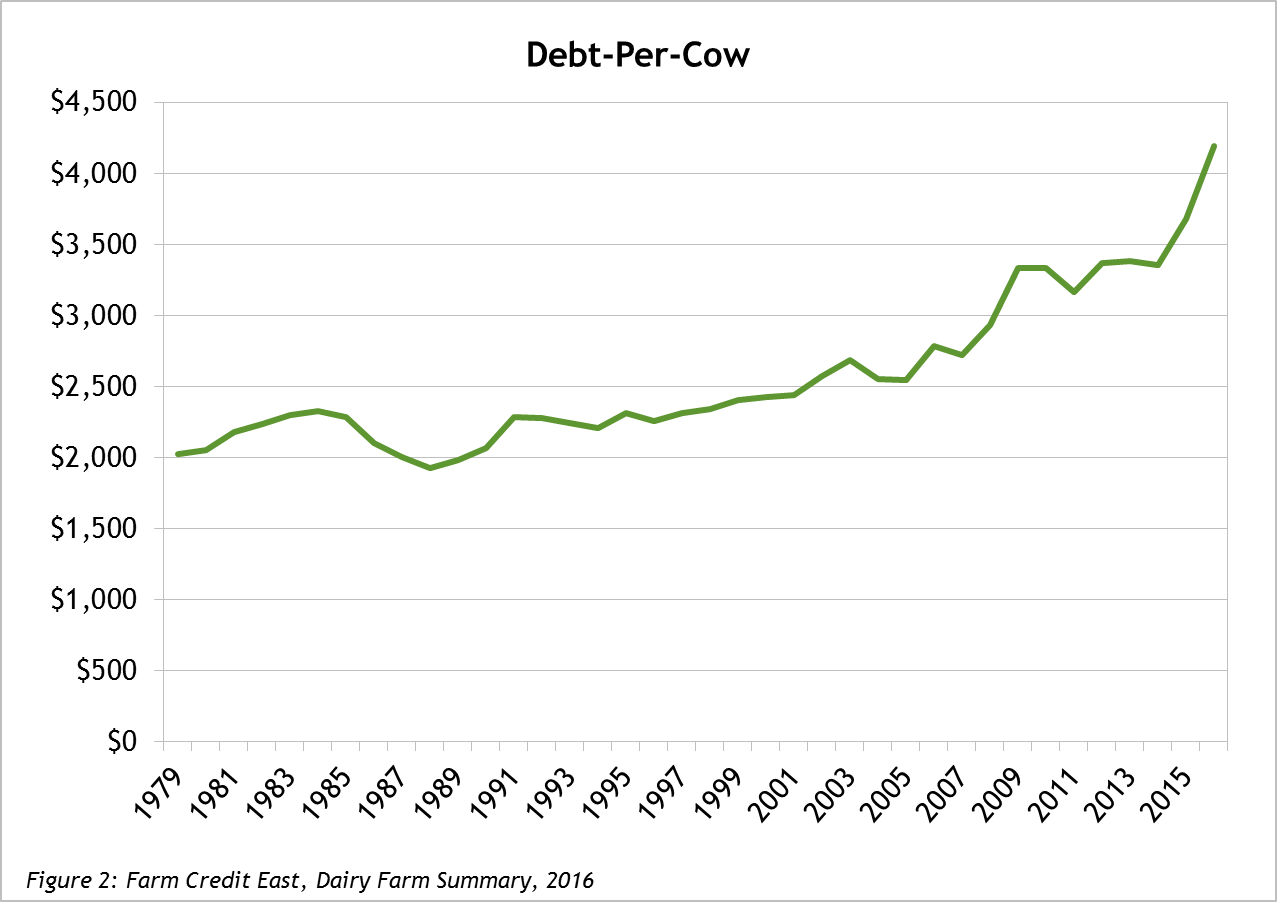 2017 promises modest recovery in milk prices, with projections ranging from $1.12 to $1.49/cwt. higher than 2016’s average. It remains to be seen whether we will see a stronger rebound in 2018 or if milk prices will continue to remain near the levels seen since 2014.

Benchmarking Can Show the Way to Higher Profits

There’s no silver bullet when it comes to increasing a farm business’s profits. An important starting point for improving profitability, however, is having accurate, current financial information, and analyzing that information to determine action steps to improve your business’s bottom line.

Benchmarking is a helpful tool to compare your business to its industry peers, and to identify areas where your business excels and where it falls behind. For example, if comparable businesses in your industry have net earnings of six percent and you’re only realizing two percent, that’s a sign that you may have room for improvement. Benchmarking can start you on the path to figuring out why. If you’re planning a new enterprise or expansion, benchmarks can also be useful in setting realistic expectations for revenue and income.

Following are a few measures to look at when comparing your business results to benchmark data.

The current ratio equals current assets divided by current liabilities. A ratio above one indicates that the operation has current assets (assets that can be converted to cash within 12 months) that exceed current liabilities (obligations due within one year). The higher the ratio, the greater (and stronger) the liquidity of the business. Over 1.5 is desirable. A cautionary note is that the current ratio includes inventory which may not be immediately saleable, such as in inventory-heavy industries like nursery, which is why the quick ratio is also important.

The quick ratio measures an operation’s ability to meet its short-term obligations with assets that can quickly be converted into cash. These are current assets, but excludes inventory, which may take longer to convert to cash. The higher the number, the better the company’s liquidity position. It’s not uncommon for businesses with substantial inventory to have a ratio below 1.0. That means that the owners are counting on the sale of inventory or crops to pay suppliers, debt payments and other obligations that will come due within the year, but if they had to meet all their current obligations with cash right away, they might have difficulty.

Percent net worth is the net worth, or equity, of the business divided by its total assets. It is a measure of how much of the business the farmer owns free and clear of any liabilities or obligations. The higher the number, the stronger the overall financial position of the business.

Fixed expenses as a percent of gross income measures the portion of farm revenue needed to cover overhead. These expenses tend not to change with differences in output.

Net margin as a percent of gross income is the portion of gross revenue that represents net farm profit. In this table, net farm earnings is calculated before owner draw.

Return on assets (ROA) is the amount of profit that an operation earned relative to its total assets. ROA provides a measure of how efficiently management can generate a return from the assets of the business. The higher the ROA, the better the business is performing.

Return on equity (ROE) is similar to ROA, but measures the profitability of the business in relation to the owner’s equity invested in the business, as opposed to its total assets. 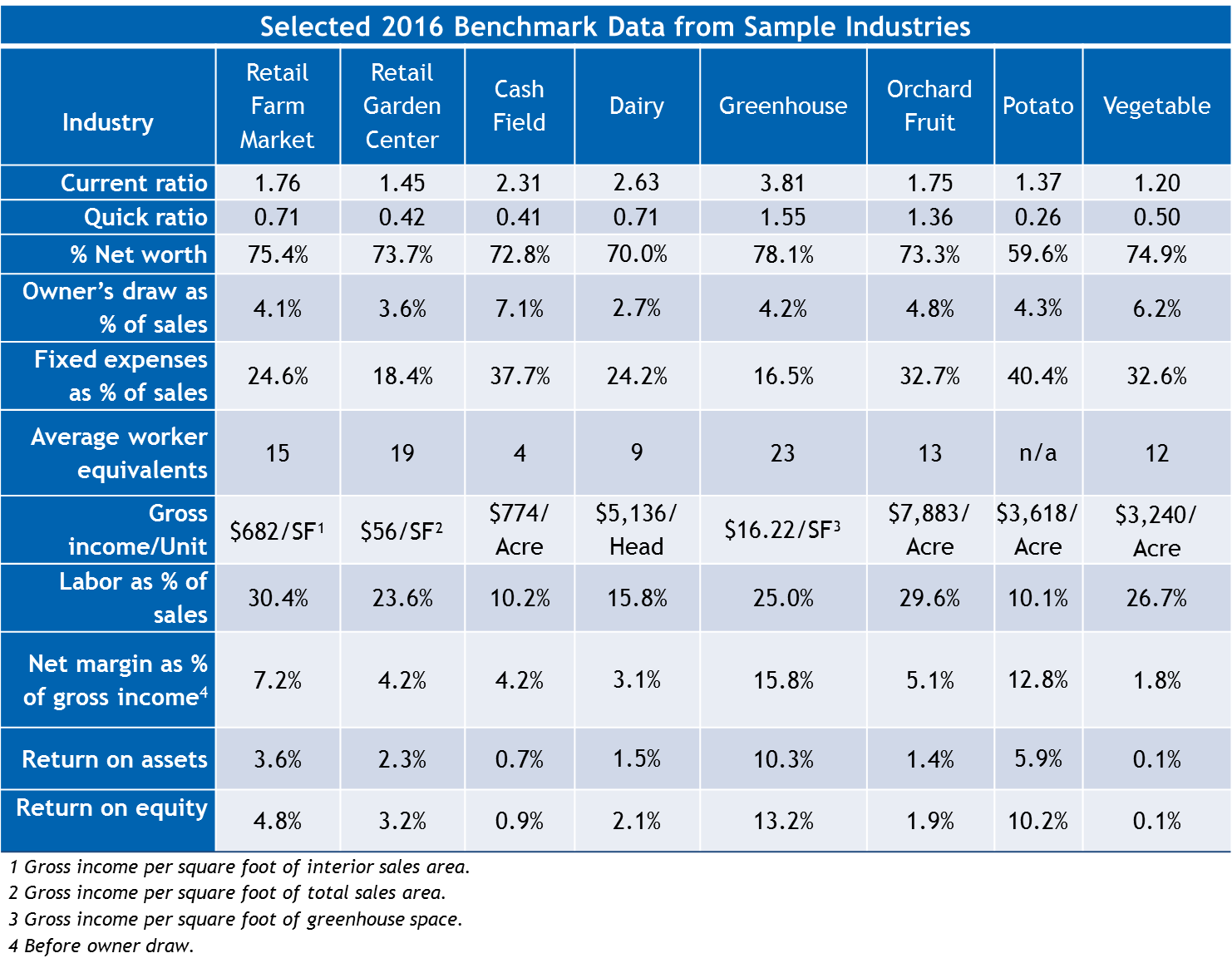 Retail farm market: These are businesses who primarily sell fresh produce at retail. Most have some vegetable production, but also buy in product for resale. The average farm market earned a 3.6 percent return on assets, but results in our sample varied from very high returns to significant losses. Size of operation also varied, with gross sales ranging from about $250,000 to over $7 million.

Retail garden center: These are also primarily retail businesses, engaged in selling live plants. Many also have some agricultural production, primarily of annuals and perennials, but a significant portion of sales inventory is typically bought from other growers. As with other benchmarks, individual results varied, ranging from significant profits to modest losses. Gross sales in this group ranged from about $400,000 to several million dollars for some operators with multiple locations.

Cash field crops (i.e. corn, soybeans, hay): Field crop producers averaged a net loss last year, after owner draw, and a return on assets of 0.7 percent. Falling commodity prices have been hard on this sector. Most cash field crop farms had few employees, with labor comprising only 10.2 percent of sales, and the top profit farms were the most efficient with a high level of income per total worker equivalent. Gross sales in this category ranged from less than $300,000 to several million dollars for some farms.

Dairy: Dairy faced a challenging year in 2016 due to low milk prices, but producers managed to tighten their belts and still realize positive earnings. While returns were modest, dairy farmers, on average, still maintained an acceptable liquidity position. Despite economizing on the part of farmers, overall profits were weak, with farmers realizing only $15 per cow in net earnings, excluding nonfarm income.

Greenhouse: The average greenhouse earned a respectable 10.3 percent return on assets in 2016. However, the distribution of results was wide, with reported net margins ranging from -5 percent to more than +15 percent. While the bottom 25 percent profit group had an average ROA of -0.6 percent last year, the top 25 percent profit group earned an average return of 14.5 percent. The top profit group included a broad mix of sizes, and included both the smallest producer in the benchmark, as well as several multi-million dollar operations. Economy of scale may have been a factor because while the top profit group contained a mix of sizes, the bottom profit group was comprised entirely of operations with less than $2 million in sales.

Orchard: Orchard operations managed to earn modest profits in 2016, averaging a 1.4 percent ROA. Several of the orchard fruit growers in our benchmark had negative returns, and results ranged from below -7 percent to greater than +13 percent ROA. Labor is a big cost for orchard growers, and the average farm had 13 full-time worker equivalents. The top profit orchards were those who used labor most efficiently. The growers with the highest gross income per total worker-equivalent were among the most profitable. Those farms with low overhead (low fixed expenses as a percent of revenue) also performed better.

Potato: Although there is overlap between potato and fresh market vegetable, this category is geared towards wholesale growers producing primarily or exclusively potatoes. The average farm in this category had 401 tillable acres. While the current ratio for this benchmark was a healthy 1.4, the quick ratio was only 0.3, indicating that participants hold most of their current assets as inventory. Fixed expenses were higher than most crop farming sectors.

Fresh market vegetable: Growers had relatively low returns last year, with an average ROA of only 0.1 percent. As with other categories, results varied from negative to several farms with returns of more than 10 percent. The most profitable farms generally had gross revenues of more than $1 million.