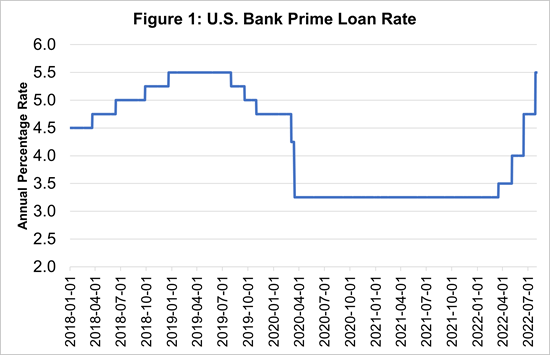 The U.S. Federal Reserve (“the Fed”) has raised the Federal Funds target rate 2.25% from near zero to a range between 2.25% and 2.5% since the beginning of the year. This has, in turn, resulted in corresponding interest rate increases for businesses and consumers on everything from bank loans to credit cards. Why is the Fed acting this aggressively, do we expect it to continue and what does it mean for Farm Credit East borrowers?

The Fed’s Mandate and Interest Rates

The U.S. Federal Reserve System – America’s central bank – has a dual mission: It is tasked with the dual mandate of pursuing the goals of maximum employment and price stability. It does this by using a variety of policies to influence the overall U.S. economy.

One of the main tools used in pursuit of this mandate is raising or lowering the Federal Funds target rate (the rate at which commercial banks borrow and lend overnight funds to the Fed), to either expand or contract the overall money supply and raise or lower interest rates across the economy. This, in turn, affects both business and consumer spending and investment and ultimately can accelerate or cool economic growth.

Low interest rates can boost spending and investment, raise GDP growth and encourage the hiring of more workers, lowering unemployment. However, a robust economy with low unemployment is likely to lead to price increases, leading to high inflation.

To combat high inflation, the Fed typically raises interest rates in an effort to cool the economy and reduce pressure on prices. While price stability is generally considered a good thing, if the economy tilts into recession, businesses may reduce hiring, and unemployment will rise. Thus, the Fed is trying to “thread the needle” by managing interest rates and the money supply at a level that leads to inflation of around 2% per year, while simultaneously achieving the maximum employment level that the economy can sustain over time. This is extremely difficult to achieve in practice, and the Fed sometimes over- or under-shoots this target. 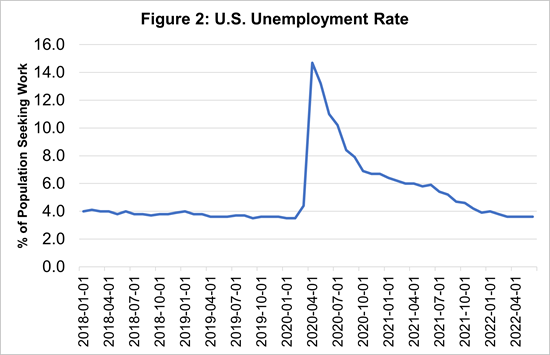 Recent History and the Current Economy

Following the pandemic-related shutdowns, the economy contracted by nearly one-third, and unemployment soared to a peak of nearly 15%. In an effort to avoid an extremely severe recession, the Fed acted aggressively by dropping interest rates sharply. This, coupled with unprecedented federal stimulus spending, basically achieved that goal: U.S. GDP growth rebounded, and unemployment rapidly retreated, eventually returning to pre-pandemic levels.

The problem is that these actions have contributed, along with supply chain disruptions throughout the economy, to inflation increasing to a rate not seen in about 40 years. So, the Fed, just recently trying to steer the economy away from recession, now faces the difficult challenge of trying to constrain inflation. This was made especially difficult because of the compressed timeline between the shutdown and the recovery, as well as the unprecedented nature of the pandemic. Rising inflation started to appear as early as the middle of 2021, but the situation is complicated: Some of the upward pressure on prices was driven by surging consumer demand, but another major factor was supply-chain constraints related to the pandemic. 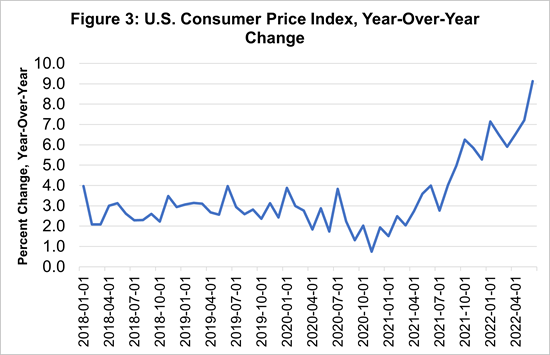 Many economists felt that these supply-chain pressures would be temporary, and that inflation would cool on its own in a matter of months. This belief led to the Fed waiting to act on inflation, and, in retrospect, they may have waited too long. By the time the Fed started raising interest rates, a quarter-point rate hike in March 2022, inflation had exceeded their target for over a year, and had reached 8.5%, a level that would prove challenging to reduce. Looking back, some of the Fed’s own economists admitted they may have put too much faith in the hope that rising prices were temporary. Randal Quarles was quoted in the New York Times saying, “It was a complicated situation with little precedent – people make mistakes.”1

It’s worth noting that the current prime rate — 5.5%, following the July increase — remains moderate by historical standards. The prime rate was 8.25% in 2007 and was at 5.5% as recently as 2019. This means that the Fed still has a lot of room to raise rates further if needed to slow inflation.

Already we are starting to see the economy cool off. The advance estimate of second-quarter GDP growth showed a contraction of -0.9% (annualized), the second consecutive quarter with negative GDP. While the Fed’s mandate includes price stability and maximum employment, it does not mandate robust economic growth. A looming recession may not convince the Fed to take their foot off the brakes as long as inflation remains elevated, and the job market remains tight. Ultimately, because a slowing economy can reduce inflationary pressure, falling GDP could be considered a result of the Fed’s actions.

So where will the Fed go from here? The Fed’s own projections suggest we’re likely to see steady, additional rate increases over the coming 12-18 months as long as inflation remains elevated. Longer-term, rates may come back down, but in the short- to medium-term, they show no signs of reversing course, and their delay in raising rates may require them to act more aggressively than they otherwise would have.

For his part, Federal Reserve Chairman, Jerome Powell, has indicated that the Fed is more concerned at this point about the risk of failing to stop high inflation than the risk of raising rates too high and causing a recession.2

The bottom line: Businesses would be smart to plan for more rate increases and sustained higher interest rates for the coming 1-2 years. This will be accompanied by slower economic growth than what we saw last year. Forecasts suggest that while we may avoid a significant recession, we are likely to see below-trend economic growth for the remainder of 2022 and into 2023.3

What Do the Fed’s Action’s Mean to Farm Credit East Borrowers?

Farm Credit East borrowers who have variable rate loans tied to Farm Credit East’s Base Rate have seen the impact of the Fed rate hikes, so some may be wondering about the connection between the two. While Farm Credit East does not access the Fed relative to overnight lending or borrowing activity, the Federal Funds rate nonetheless sets the market for all issuers of short-term bonds.

The source of funds that Farm Credit East (and all Farm Credit System institutions) lends are bonds issued by the Farm Credit Funding Corporation. These bonds’ maturities range from very short-term to long-term, and the bonds that fund variable rate loans are generally short-term in nature. When the Fed raises the Federal Funds target rate, it causes the interest rate on all short-term bonds being issued to increase in order to attract investors.