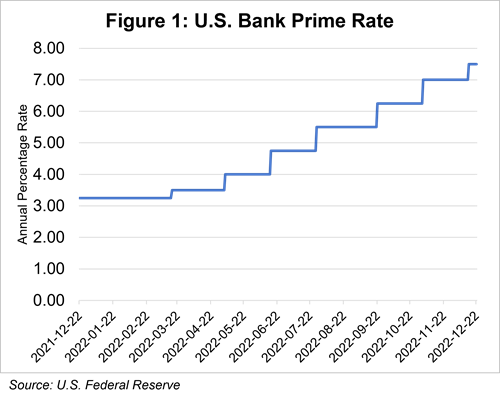 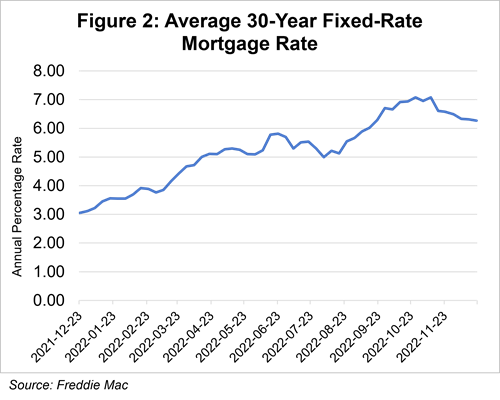 Short-term interest rates, such as the U.S. Bank Prime Rate, tend to move in lockstep with the Federal Reserve’s Federal Funds Rate. (For reference, this is the rate at which banks can borrow money overnight- the ultimate short-term loan). The drivers of long-term interest rates are more complex and market driven. The Federal Funds Rate is one of these drivers, and long-term rates typically move in response to changes by the Fed, but not always. We saw this in particular in November 2022, when short-term rates rose, while long-term rates fell.

One reason for this is the dynamics of the secondary market for mortgage-backed securities (MBS), which makes up the bulk of long-term consumer debt in the United States. Most mortgages written by U.S. banks end up being bundled into investment products that are eventually sold to investors. The demand for MBS varies with market dynamics and with investor perceptions of what the future might hold for interest rates. Recently, after the Fed put through another short-term rate hike, October inflation numbers came in better (lower) than expected, leading investors to believe that the Fed will slow down its rate hikes. This caused a surge of demand for MBS by investors feeling that long-term rates might slide in the future. When demand for MBS increases, this drives up their prices on bond markets, which in turn, reduces their effective yield. In other words, investors’ expectations become self-fulfilling.

So, while Fed rate increases generally lead to rising mortgage rates, it’s not a direct relationship. Long-term rates are more driven by what investors believe is going to happen with interest rates and the economy, rather then where things stand today. If the market anticipates a rising rate environment, then long-term rates may rise, while if the market expects falling interest rates (or sometimes even a slower pace of increases), long-term rates may fall in anticipation.

After hitting a peak of 9.1% in June, U.S. year-over-year inflation, as measured by the Consumer Price Index, has declined for five consecutive months, settling at 7.1% in November. While this is still way above the Fed’s 2% target, it’s an encouraging sign. Energy prices, particularly motor fuels, have moderated and are below their peak levels from earlier in 2022.

On the other hand, the persistently hot job market continues to run at 3.7% unemployment, and consumer spending has risen each month, suggesting a resilience in the economy that could put upward pressure on prices. Some analysts feel that we may not see inflation really settle down without at least a mild recession and higher unemployment to cool wage pressure.

So, what does the future look like for interest rates? Perhaps the best indications are the statements made by Fed officials themselves, who have suggested that while further rate increases may be coming in 2023, their pace is likely to wind down — assuming, of course, that inflation continues to decline. Over the longer term, the Fed’s Open Market Committee — the key body setting federal monetary policy — forecasts a modest decline in interest rates. However, we may see near-term rate increases if needed to bring inflation closer to the 2% target. In other words, rates may go a bit higher before we see a leveling off.

In a rising rate environment, it can be a prudent risk-management strategy to fix some variable-rate debt. Although it’s likely to come at a premium to today’s variable rates, this can help buffer against the risk of rate increases above what the market expects.