The number of foreign agricultural workers in the U.S. under the H-2A visa program has significantly increased in recent years as it has become harder for producers to find domestic workers. While the program still supplies only about 10% of farm labor nationwide, H-2A employment increased fivefold between 2005 and 2019.1 Along with an increased number of workers has come increased costs. The wages H-2A employers are required to pay, known as the adverse effect wage rate (AEWR), have increased by 46% over the same period, using the New York AEWR as an example.2

Employers seeking to employ foreign workers under the H-2A temporary work visa program are required to offer, advertise in their recruitment, and pay wages at least equal to the AEWR applicable to the employer’s job opportunity. For most H-2A job descriptions, the wage offered and paid to H-2A workers and workers in corresponding employment must equal or exceed the AEWR, the agreed-upon collective bargaining wage, or the applicable minimum wage imposed by Federal or State law or judicial action, or any agreed-upon collective bargaining rate, whichever is highest.3 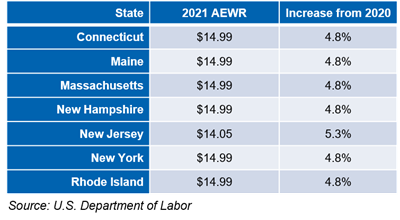 The significant increase in the AEWR over recent years has drawn controversy, as some farm employers have pushed back on increases, while others argue the wages should be increased further.

In November, the Department of Labor announced that the AEWR would remain at the 2020 level through 2022, after which it would be adjusted by the employment cost index for wages and salaries as determined by the Bureau of Labor Statistics. This announcement, however, was met with legal challenges, and eventually overturned by the courts, who ruled that in addition to eliminating the proposed two-year freeze, the department must return to its previous methodology for determining the AEWR, which has resulted in this year’s rates.