This article is written by Mark Cannella, Extension Associate Professor at the University of Vermont.

The United States farm-gate value of maple syrup is ~ $150M annually. The industry is relatively small compared to other commodities but its ongoing expansion continues to have a positive economic impact on forested regions in the Northeast.

From 2007-2017, U.S. production and market expansion grew swiftly. The U.S. tap count, based on the USDA National Agricultural Statistics Service, stabilized near 14 million taps since 2018.1 Maple syrup production had held consistent at ~4.2 million gallons (46 M pounds) for two years until the 2021 maple crop came in far below expected levels.

In 2021, the total value of maple syrup sales in the U.S. was up 20% from the previous year. Canadian syrup exports were up 21% in 2021, driven mainly by demand in the United States but also demonstrating expanding markets in other hemispheres. Increased demand came from ongoing COVID-19 stay-at-home patterns that resulted in more cooking at home. Households also received financial support from government relief that has increased disposable incomes. Consumer patterns favor maple as well. National trends toward nutrition-conscious shopping and healthy eating aligns strongly with maple syrup’s image as a lightly processed, single ingredient, high quality sweetener. Maple is well positioned in the marketplace as an alternative to refined sugars and corn syrup. Strong demand and the short 2021 crop led to the Quebec Maple Syrup Producers (PPAQ) to utilize a substantial amount of syrup from the Strategic Reserve. Despite growing concern, PPAQ made announcements that there is no shortage, and the reserve has accomplished its goal to maintain an uninterrupted supply at stable prices.

In 2021 PPAQ announced the addition of 7 million new taps to their total tap quota. This expansion sends a signal that market growth is strong and that PPAQ will maintain dominance as the global leader in syrup production, currently producing 72% of global syrup. With this position, the PPAQ exerts price influence over the entire marketplace. The PPAQ previously agreed to a three-year price structure for syrup in effect through early 20232  and Canadian syrup imports (60% of U.S. consumption) drive syrup pricing. Bulk syrup buyers monitor U.S. — Canadian currency exchange trends and use the rates as an adjustment factor to keep U.S. prices on par with imports. PPAQ prices set a de facto price floor and imports into the U.S. keep higher prices in check, assuming there is no shortage of syrup. U.S. bulk producers got higher prices in 2021 but many were disappointed to recognize the stability offered by the PPAQ prevented a larger supply induced price increase. For direct marketers, 5% to 10% price increases were implemented by those with established brands and loyal customers to compensate for a poor crop.

Equipment manufacturers reported strong demand in 2021, a preview of more U.S. taps coming on line in 2022. Producers who deferred maintenance or expansion due to tight cash flow in 2021 will be waiting to see their 2022 yield and any price adjustments before they reinvest. Modern maple enterprises are capital intensive. Total assets, excluding real estate, generally total $55+ per tap. Positive cash flows are more likely if prices stay above $2.40 per pound. Another wave of U.S. tap expansion may occur if prices hold over the next two years. 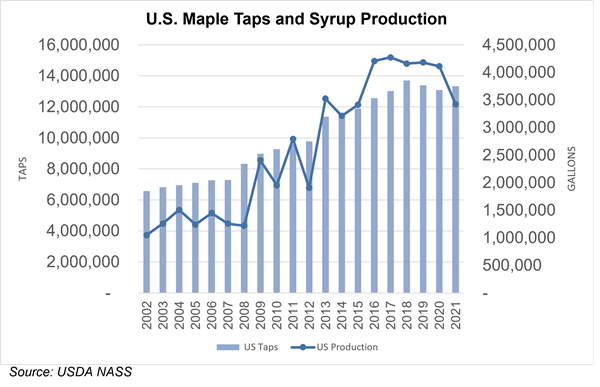