Does the Farm Economy Move in Sync with the General Economy?

At a recent meeting of Farm Credit East’s nominating committee, which selects candidates for the cooperative’s board of directors, a member asked our CEO whether a rising general economy was good or bad for the agricultural economy. We thought it was a great question, and decided to do a little research. 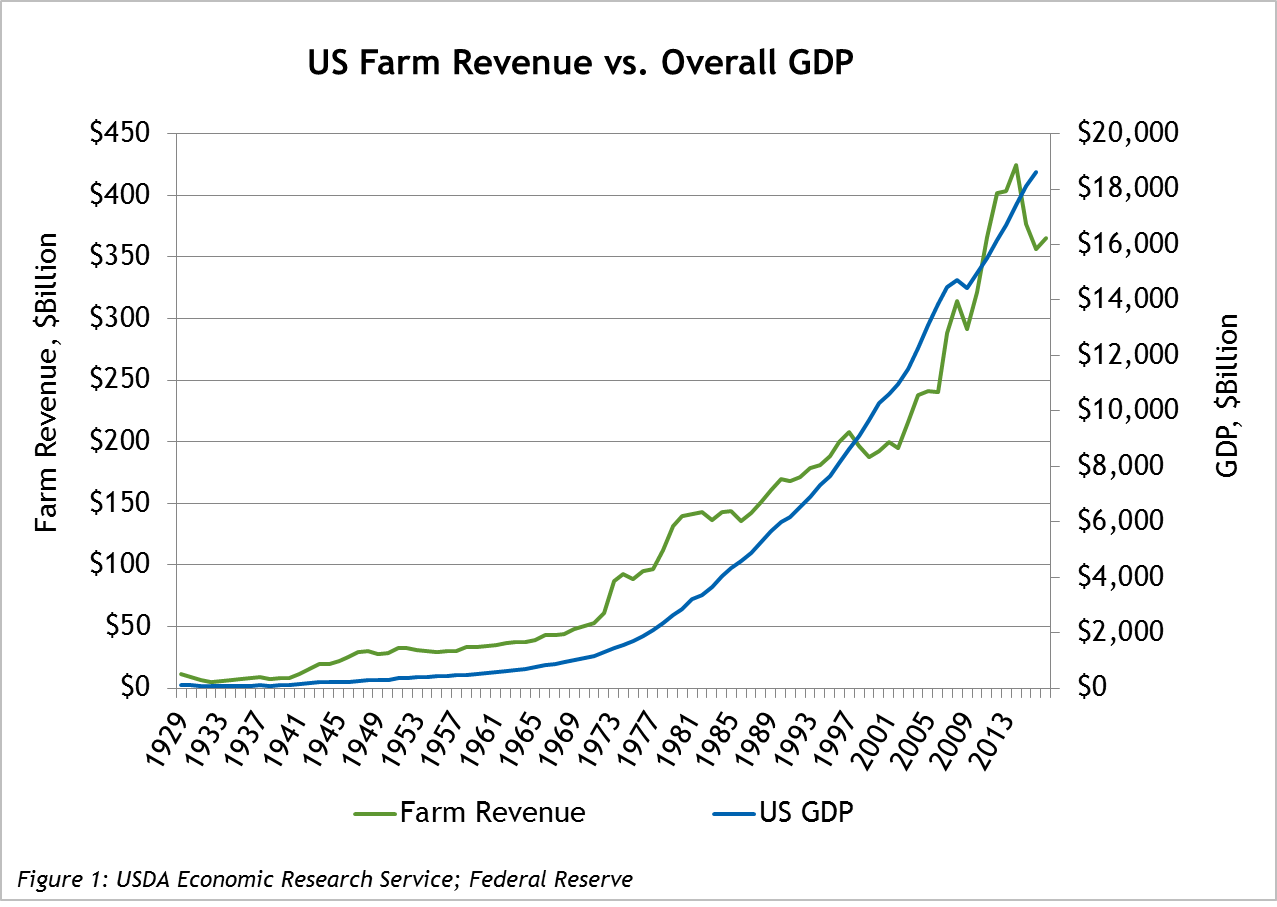 Recently, while the general U.S. economy has picked up steam, the agricultural economy (or at least the commodity-driven sectors), seems left behind. From 2014 through 2016, overall U.S. GDP grew by about 6.9 percent, while U.S. agricultural revenue contracted by 16 percent. 2018 promises a similar scenario; an expanding general economy, and a relatively weak farm economy.

This begs the question: does a good overall economy help or hurt the ag economy? A look at the data suggests that while the general economy and the ag economy often move together, there are periods (such as recently), when they most certainly do not.

Overall farm revenue and overall U.S. GDP have largely tracked together, see Figure 1, although farm revenue has been more volatile. We did see major setbacks in farm revenue from 1997-2003, and again in 2014-2016, which were periods in which the general economy did well. 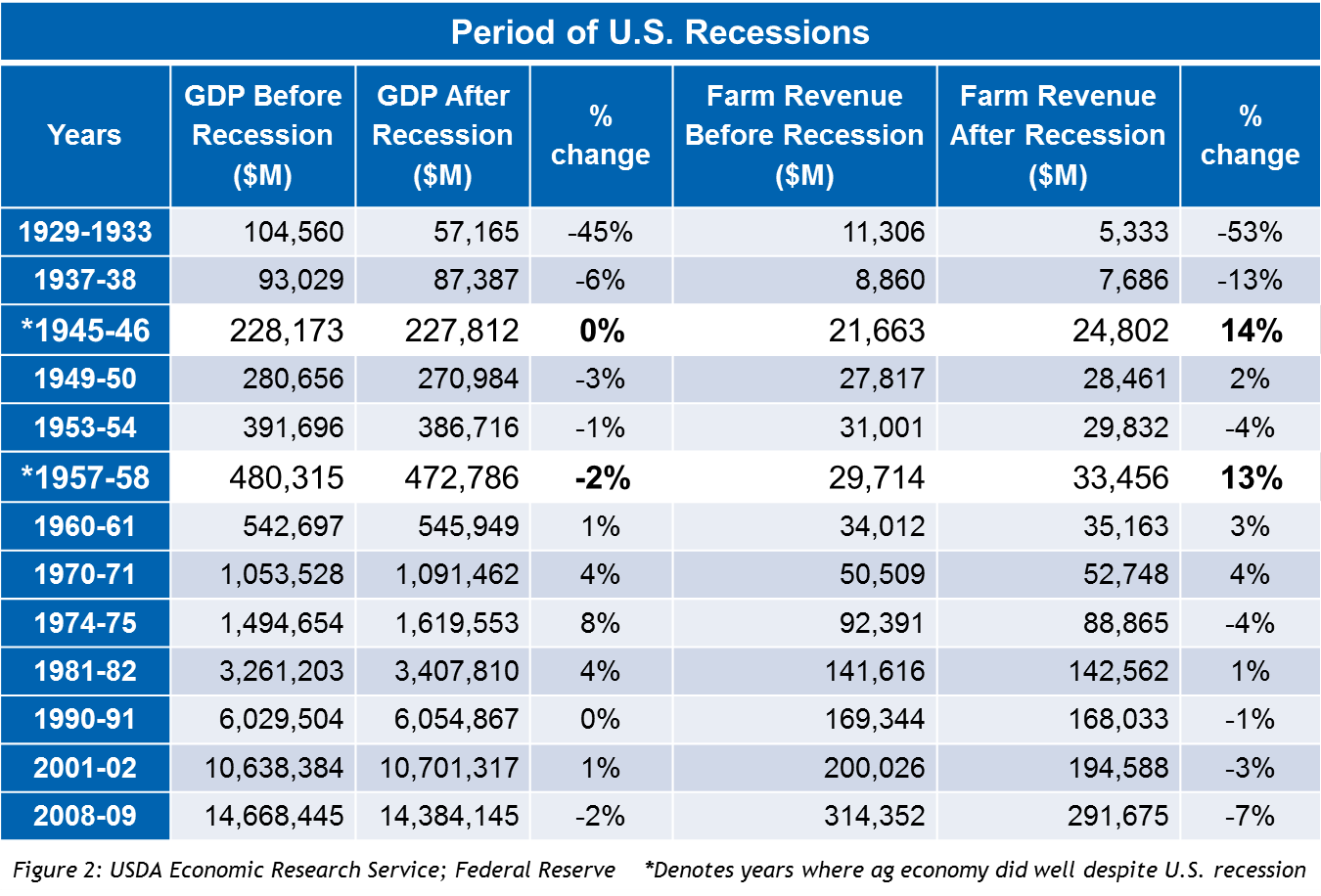 Overall, the ag economy is more closely tied to exports than the overall U.S. economy. While exports of all goods and services (including agricultural exports) make up about 12 percent of U.S. GDP, they account for about 20 percent of all U.S. agricultural production (and more than half of some commodities).

A surging U.S. economy tends to strengthen the U.S. Dollar, which makes exports relatively more expensive for foreign buyers and can negatively affect commodities like dairy, apples, grains and oilseed. On the other hand, a robust economy tends to boost discretionary consumer spending such as dining out, higher-end foods and consumer-driven commodities, which is beneficial for industries like agricultural retail, specialty products and ornamentals.

There are other major influences on the agricultural economy that are insignificant to the overall economy, such as weather, biofuels demand, disease outbreaks and more. These factors have the power to significantly affect agricultural revenue, while they are largely nonevents for overall U.S. GDP.

While Figure 1 shows the dollar amounts of U.S. farm revenue compared to overall GDP, Figure 3 shows the relative change of each, compared to the prior year, which is perhaps more indicative of what feels like a “good” or “bad” economy.

Going back to 1975 (Figure 3), we can see there are periods where the ag sector tracks similarly to the overall economy, but periods in which it diverges wildly. The ag sector is also significantly more volatile. On the right side of the chart, we can see that while the overall U.S. economy has been chugging along at a moderate positive rate of growth, agricultural revenue has taken a nose dive since 2014. 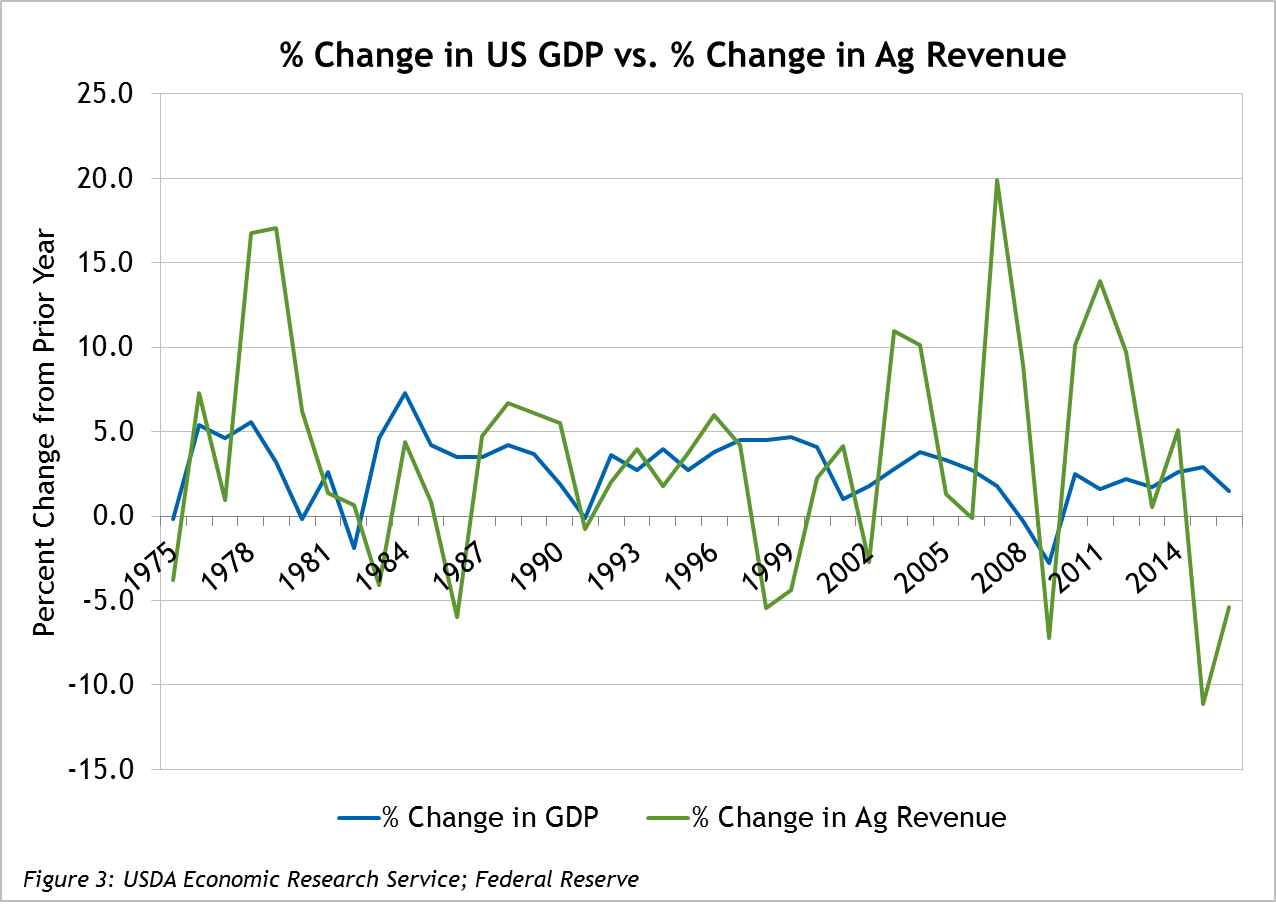 In conclusion, the answer to the question of whether the U.S. economy and the farm economy move in sync (or counter-cyclically), is mixed – sometimes yes, and sometimes no. The overall U.S. economy is much more of a “big ship” – slower to respond – and changes tend to be moderate. On the other hand, the agricultural economy is far more volatile and prone to significant swings based on weather, commodity prices, international demand and other factors.

Overall, U.S. agriculture, as well as that of the Northeast, continues to face some challenging market conditions, but there are also a number of bright spots and some improvements are in the forecast. Cash field crops in particular are dealing with adverse pricing. Dairy prices improved somewhat in 2017, but are looking lower for 2018. Nursery and greenhouse, which have had improving economic conditions for the past few years, are reporting relatively good results.

FarmCreditEast.com’s Industry Snapshots provide the latest business and market intelligence from our industry experts on a variety of natural resource-based industries, including agricultural sectors, commercial fishing and forest products.

Click here to read the full summary of these snapshots.

"We don't celebrate technology for technology's sake; we celebrate how others...harness the power of technology to go out and change the world." - Satya Nadella