The US-Mexico-Canada Agreement and its Effects on US Agriculture

The United States and Canada reached a deal on September 30 to update and replace the North American Free Trade Agreement (NAFTA) with both sides making some key concessions. They will join Mexico in updating the 1994 deal, which will now be called the United States-Mexico-Canada Agreement (USMCA).

If approved by legislative bodies in each of the three nations, the new accord could improve access to Mexican and Canadian markets for U.S. agricultural products, though the timing and extent of the benefits are unclear.

Over the last 20 years, agricultural supply chains have become very integrated between the three countries. Since NAFTA was enacted in 1994, U.S. agricultural exports to both Mexico and Canada have roughly tripled in volume. Scrapping the agreement would be highly disruptive, so a smooth transition to USMCA will be critical.

Dairy was one of the most contentious issues negotiated as part of the USMCA. Canada, which has been very protective of its dairy industry, was excluded from the NAFTA agreement. In the USMCA, both Canada and the U.S. agreed to allow greater access to their respective dairy markets.

As the U.S. has a much larger dairy industry and typically runs a significant trade surplus with Canada in this category, it appears the U.S. has the most to gain in this area. Although Canadian dairy exports to the U.S. may increase as well.

Under the agreement, Canada maintains its steep tariffs (200% +) on most dairy products, but raised the allowable quotas before these tariffs take effect. If the U.S. is able to fulfill these quotas, it will expand U.S. exports from one percent of the Canadian market to roughly 3.5 percent of the market, increasing exports by more than 600 million lbs (milk equivalent), by year six of the agreement.

Another key concession made by the Canadians is the elimination of their “Class 6 and 7” milk pricing, which undercut U.S. ultra-filtered milk and milk proteins. This pricing affected not only U.S. exports to Canada, but also allowed Canadian exports to undercut U.S. product on world markets.

The bottom line? The USMCA will likely allow the U.S. to increase dairy exports into Canada, although the increases may not be as great as what was hoped for – and will be phased in over time. The effect this may have on U.S. milk prices is uncertain at this time. 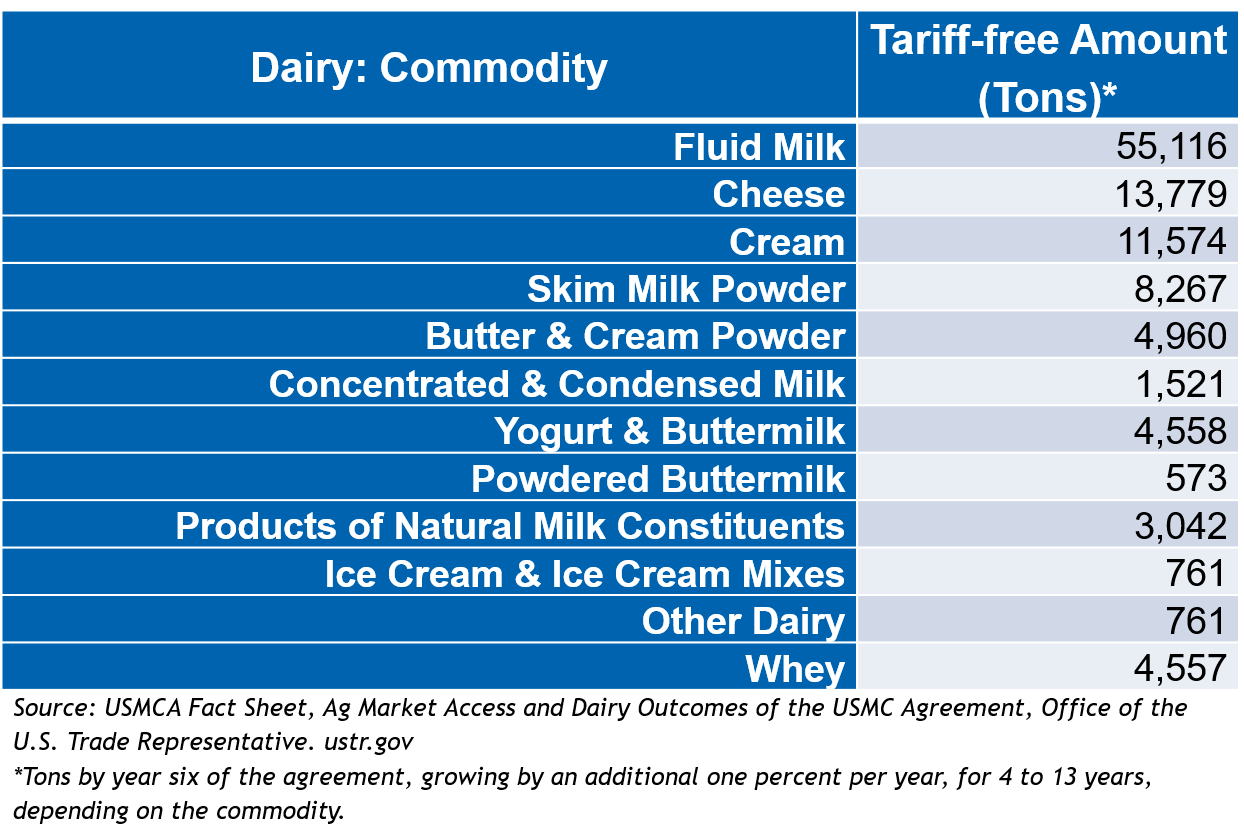 Agricultural products that were at zero tariff rates under NAFTA will remain so.

In a win for Canada, the USMCA also preserves a key trade dispute mechanism from NAFTA that helps protect their lumber industry. Chapter 10 of the agreement maintains “a binational panel review mechanism for reviewing anti-dumping and countervailing duty determinations by either the U.S. or Canada.” This mechanism will be important for resolving trade disputes between the two countries and will block either nation from unilaterally imposing punitive tariffs on the other – as the U.S. did last spring with regard to Canadian softwood lumber, which Canada called “unfair and unwarranted.”

Notably, the USMCA does not resolve or eliminate U.S. tariffs on steel and aluminum from Mexico or Canada. Mexico imposed counter-tariffs on U.S. dairy products, which remain in place and have reduced exports to our southern neighbor by a greater extent than any gains achieved through the USMCA.

Agriculture is a key export industry for the U.S., and access to foreign markets is crucial for the industry. Mexico and Canada are two important markets for U.S. producers and the USMCA helps ensure that much of the framework that has existed under NAFTA will remain in place. For many (though not all) producers, that is a positive development. There are also some potential market access gains under USMCA, however, there are many steps before it becomes a reality and the long-term impacts are unclear at this time.

The change that will likely have the biggest impact on New York employers, however, is that starting October 9, 2018, all New York employers are required to adopt a written sexual harassment policy and conduct annual trainings for all employees (not just supervisors) which must be “interactive.” The New York Department of Labor and Division of Human Rights have published a model sexual harassment policy and training program, both of which can be located at NYS Model Policy and NYS Model Training.

Employers may adopt the model policy and training program or produce their own program that “equals or exceeds” the minimum standards in the model program.

(a) prohibit sexual harassment consistent with guidance issued by the New York Department of Labor and provide examples of prohibited conduct;

(b) include information on the federal and state sexual harassment laws and remedies available to victims;

(c) include a model complaint form for employees to submit their claims to the employer in writing (available here);

(d) include a procedure for the timely and confidential investigation of complaints;

(e) include information about an employee’s rights of redress and all available forums for adjudicating sexual harassment complaints administratively and judicially;

(f) clearly state that sexual harassment is considered a form of employee misconduct and that sanctions will be enforced against individuals engaging in sexual harassment and against supervisors who knowingly allow such behavior to continue; and

(g) clearly state that retaliation against individuals who complain of sexual harassment or who assist in any investigation is unlawful.

Employers are required to provide each employee with a copy of its policy in writing.

Similarly, an employer that does not adopt the model training developed by the Department of Labor and Division of Human Rights must ensure that the training they use meets or exceeds the certain minimum standards.

Specifically, the training must:

(b) include an explanation of sexual harassment consistent with guidance issued by the New York Department of Labor and provide examples of prohibited conduct;

(c) include information on the federal and state sexual harassment laws and remedies available to victims;

(d) include information concerning employees’ rights of redress and all available forums for adjudicating complaints; and

(e) include information addressing conduct by supervisors and any additional responsibilities for such supervisors.

Each employee must receive training on an annual basis, and the first training must be before October 9, 2019.

New Jersey recently joined Connecticut, Massachusetts and Rhode Island in requiring employers in each respective state to provide paid sick leave to employees. The New Jersey Paid Sick Leave Act (“NJPSLA”), which went into effect on October 29, 2018, requires employers of all sizes to provide up to 40 hours of paid sick leave to employees each benefit year. The NJPSLA applies to most employees working in New Jersey “for compensation,” but expressly excludes employees in the construction industry employed under a collective bargaining agreement, per diem healthcare employees, and public employees who already have sick leave benefits.

Under the law, employers are required to designate any period of 12 consecutive months as a “benefit year,” and once established, employers cannot change the benefit year without first notifying the New Jersey Department of Labor and Workforce Development. During each benefit year, employees will accrue one hour of paid sick leave for every 30 hours worked, up to a maximum of 40 hours per benefit year.¹

The NJPSLA sets out permissible reasons an employee may use accrued sick time and provides notice requirements, recordkeeping provisions, anti-retaliation provisions, and the parameters for an employees’ potential carryover of accrued but unused sick leave. For example, under the NJPSLA, an eligible employee may use paid sick leave benefits for, among other things, the diagnosis, care, treatment or recovery for the employee’s or the employee’s family members’ mental or physical condition (including preventive care) and for time needed as the result of an employee’s or family members’ status as a victim of domestic or sexual violence.

Because the NJPSLA applies to all New Jersey employers regardless of their size and/or amount of employees, just about every employer with workers in New Jersey will feel the impact of this new law in one way or another. Employers with existing paid time off policies for personal and/or vacation days may already be in compliance with the NJPSLA, provided the existing policy allows full and part-time employees to use paid time off for the reasons enumerated in the NJPSLA and the paid time off accrues at a rate equal to or greater than the rate required by the NJPSLA. However, because sick leave laws differ from state to state (including, for example, the way sick leave time is accrued, or the permissible uses of sick leave), employers should be aware of the state-specific requirements for all locations they operate in and should be sure to review and tailor their policies in order to ensure compliance. Click here for a full copy of the NJPSLA.

Proposed regulations under the NJPSLA were released by the New Jersey Department of Labor (NJDOL) on September 18, 2018, and written comments on the proposed regulations may be submitted to the NJDOL until December 14, 2018.  Be on the lookout for further updates to unanswered questions and unresolved issues as the regulations are finalized.

Other training and compliance resources are available to Farm Credit East customers through our customer assistance program.

If using these training resources for compliance purposes, be sure to confirm the content meets the jurisdiction’s requirements.