Editor’s Note: An important part of Farm Credit East’s governance as a farmer-owned cooperative is our Customer Service Council (CSC) program. All 20 Farm Credit East branch offices have a CSC comprised of about eight to ten members who meet three times per year and provide critical feedback to our senior management and board of directors about the cooperative, and conditions in each branch office territory. The recent Spring CSC meeting included a webinar with CEO Bill Lipinski, where a question was asked regarding trade. We thought this would make a good topic for this month’s Knowledge Exchange Partner newsletter.

With some of the most productive farms in the world, and 95 percent of the world’s consumers outside our borders, it’s no surprise that the United States is – by far – the largest agricultural exporter on the globe. The USDA estimates that more than 20 percent of total U.S. agricultural production is exported. 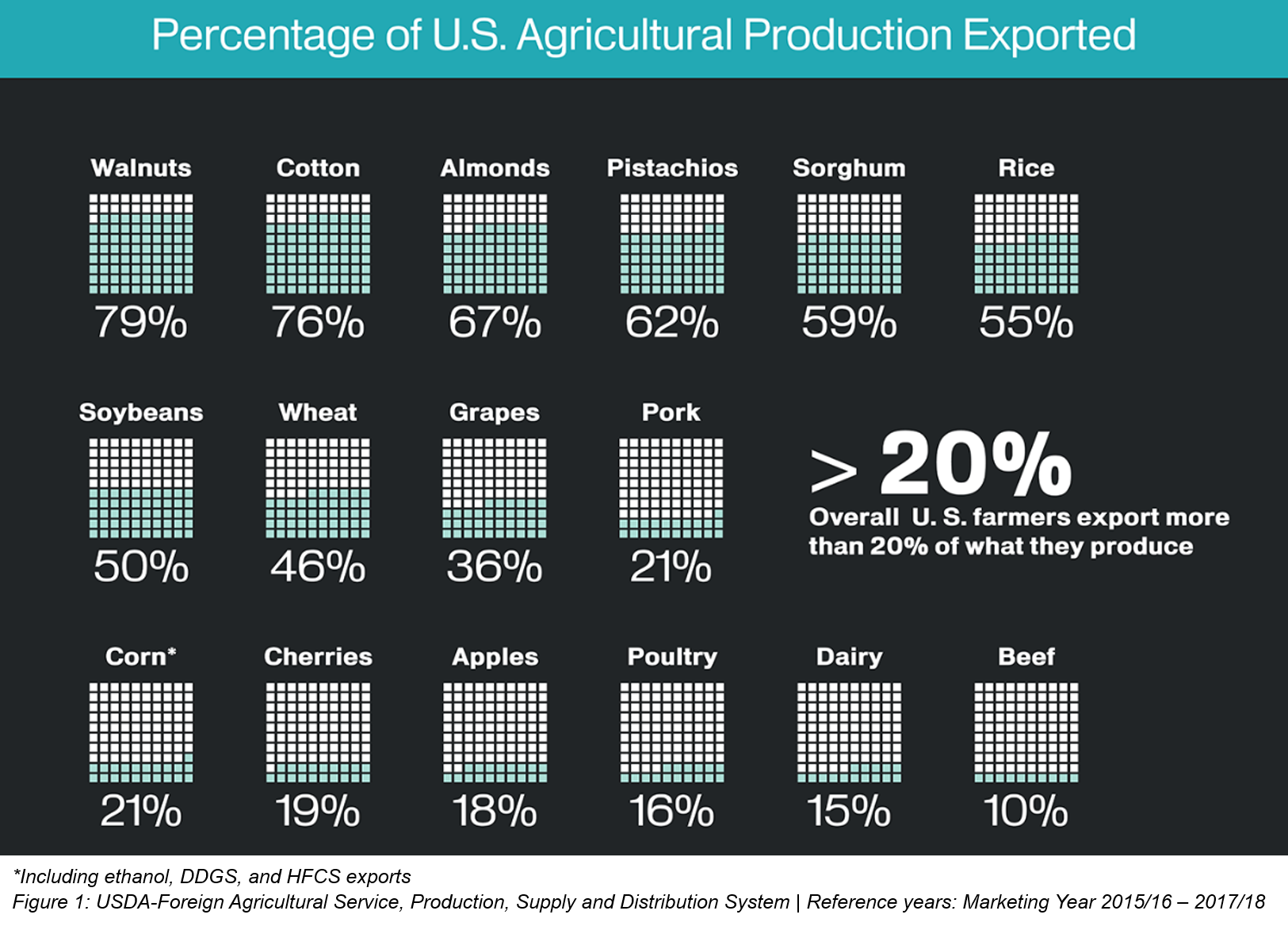 While many of our most exported crops are primarily grown in the Midwest and West, export markets are critically important for the Northeast as well.

It is estimated that 14.5 percent of agricultural products produced in the Northeast are exported, with Canada, Mexico, the European Union and Asia being the largest markets.

With international trade so important to agriculture, farmers across the country have been closely watching the news of trade disputes between the United States and some of our major trading partners. 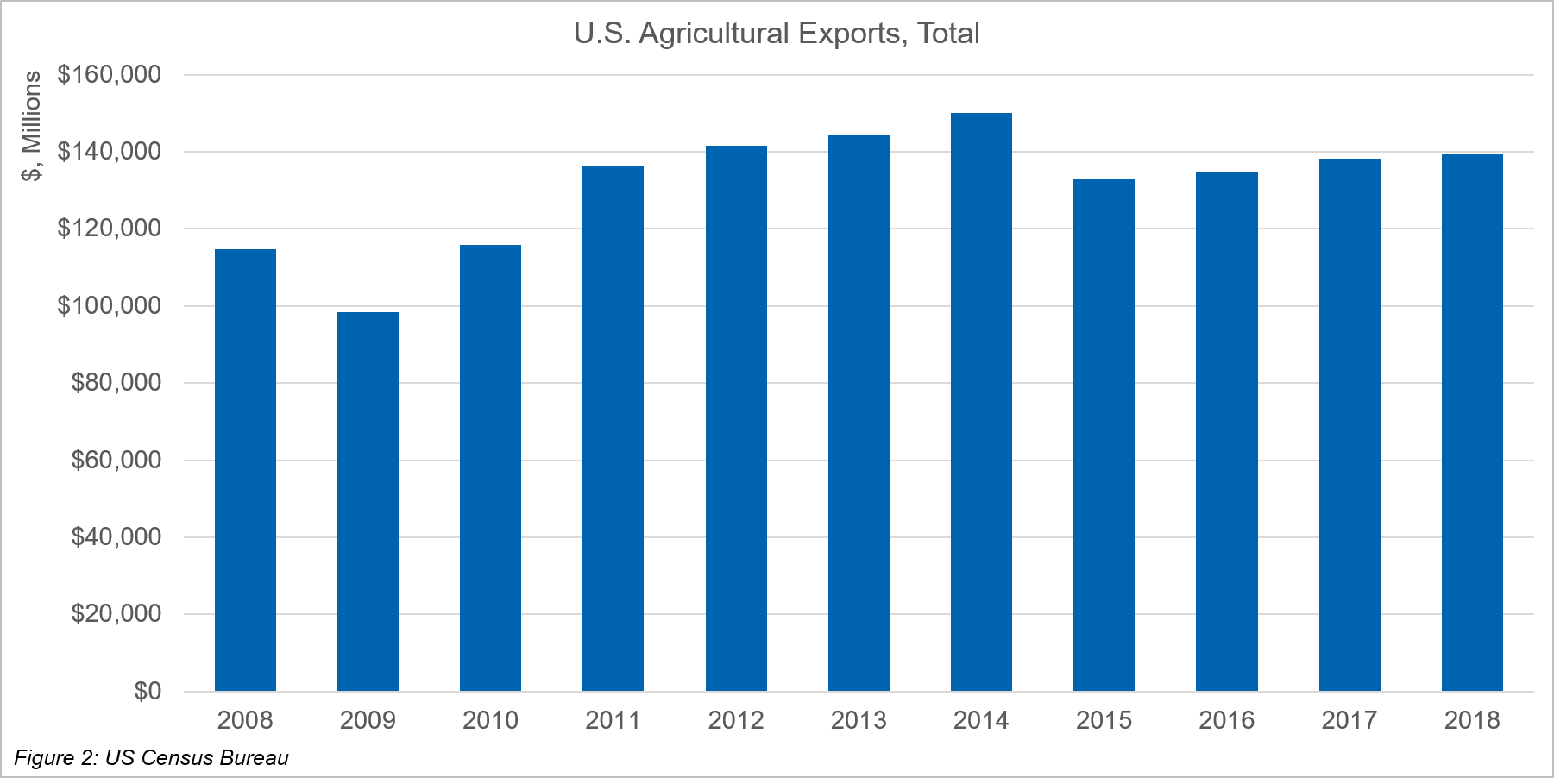 Currently, one of the most significant trade disputes is with China. Trade between the two nations, the first- and second-largest economies, is enormous. In overall trade of goods and services, the U.S. exported about $120 billion worth of goods to China and imported about $540 billion in goods from China in 2018.1 Some of these exports to China are agricultural goods to feed its 1.3 billion people. Thus farmers were concerned when, in the early months of 2018, President Trump announced a series of escalating tariffs on Chinese goods coming to the U.S. China quickly retaliated, placing tariffs on U.S. goods going to China, taking a toll on U.S. agricultural exports. 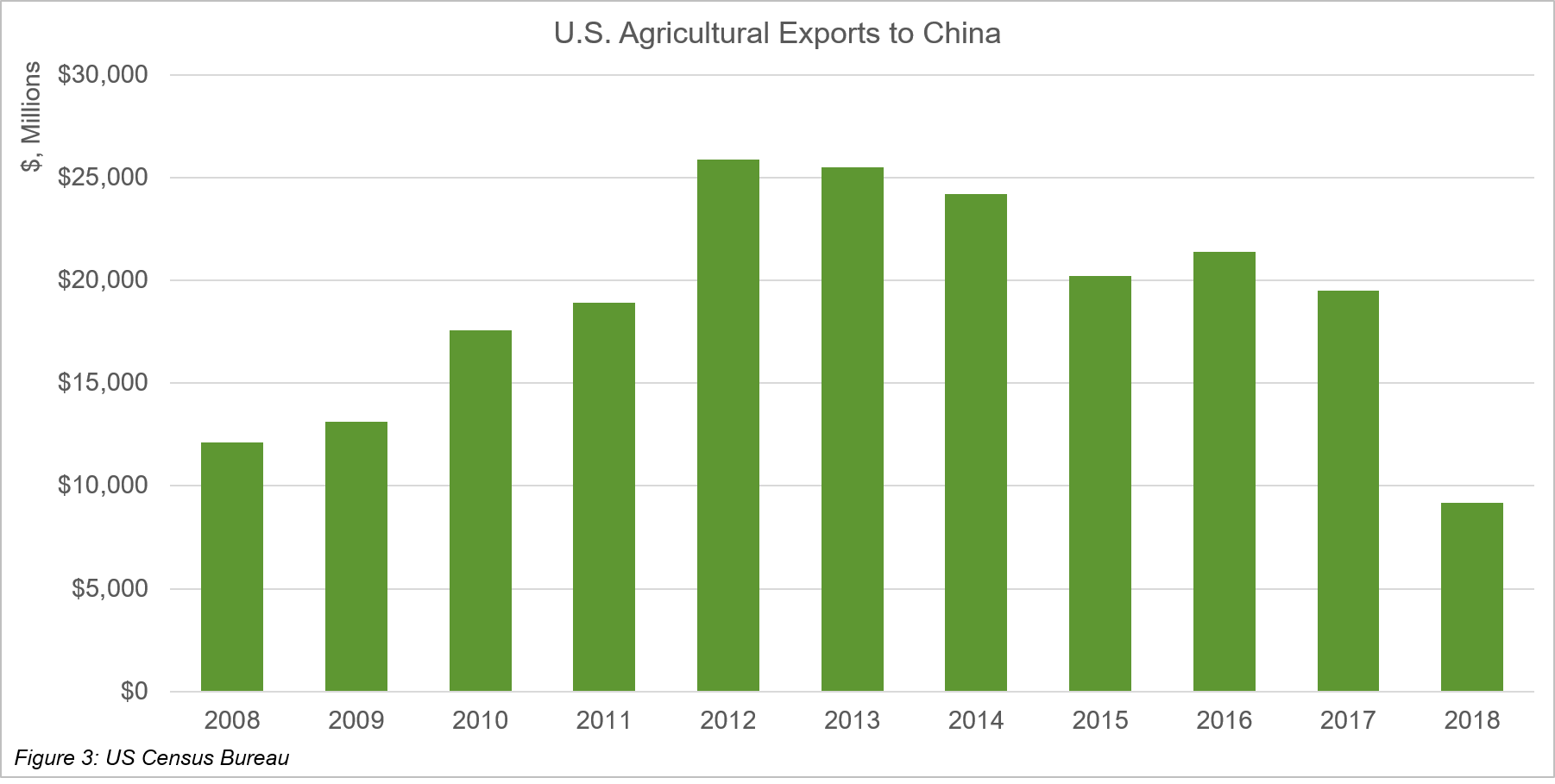 Much of the decline in exports between 2017 and 2018 was due to China buying fewer soybeans from the U.S. Chinese purchases of U.S. soybeans fell by 74 percent in 2018, declining from $12.2 billion in 2017, to only $3.1 billion in 2018.2 While overall export volumes remained roughly flat in 2018 due to gains in other markets, the loss of soybean exports to China significantly affected U.S. oilseed market prices.

A great deal of hope has been placed in the most recent rounds of talks between the U.S. and China, and President Trump has said as recently as March 20 that trade talks with Beijing are “coming along nicely.”3 However, the prospects of a quick resolution to our disputes with China were diminished by the President’s warning that he may not lift tariffs on Chinese goods for a “substantial period of time,” until he is sure the country is complying with the terms of the potential agreement. Such a decision could dim the prospects of any deal between the two nations. If no deal is reached, the U.S. has threatened to raise tariffs on more than $200 billion worth of Chinese goods from 10 to 25 percent. The increase was supposed to take effect on March 1, but was delayed to an unspecified date due to the ongoing negotiations.

A positive news story on the trade front was the signing of the USMCA by President Trump, Mexican President Enrique Peña Nieto and Canadian Prime Minister Justin Trudeau. The far-reaching agreement contains several positive items for American agriculture, including an agreement to eliminate Canada’s “Class 7” dairy pricing provision for exported skim milk powder, milk protein concentrate and infant formula. The agreement would also allow the U.S. to export more dairy products into Canada, up to 3.6 percent of Canada’s dairy market (phased in over six years), up from the existing level of about one percent.

Unfortunately, the deal does not resolve the tariffs the U.S. placed on steel and aluminum imported from the two countries into the U.S., for which both nations have retaliated. Mexico, for example, has placed a 25 percent tariff on cheese imported from the U.S., which is significant as Mexico is the top customer for U.S. dairy exports.

Critically important, is that the USMCA still has to be ratified by the legislatures of the three nations to take effect. While many hope this will happen this summer, opposition to the agreement has emerged on a variety of issues, making the path forward uncertain. The agreement is critically important for agriculture in all three nations, as more than $80 billion worth of ag products flow between the three countries each year.

It is worth noting that trade in goods and services flows both ways, and that not all sectors of agriculture have benefitted equally from foreign trade. While the U.S. has large exports of commodities like grains and oilseeds, in some (typically more labor-intensive) sectors of agriculture, we often run trade deficits. For example, in vegetables, while the U.S. typically exports around $6-7 billion worth of product annually, we generally import $12-15 billion. For this reason, some tomato growers have been skeptical of the agreement.

While not all farmers, fisheries or forest product producers export their goods directly, exports play a large role in supporting domestic prices for our products. Market prices for farm products are largely driven by supply and demand, and when exports decline, that impacts prices domestically. Additionally, some U.S. products are much more in demand internationally than they are at home.

Some of America’s most successful exporting industries are agriculture, fishing and forestry, so international trade is an important issue for many Farm Credit East members. Farm Credit East is a member of the National Council of Farmer Cooperatives, which continues to seek a level playing field for U.S. agriculture in the global marketplace. ncfc.org/issues/international-affairs/

Farm Business Succession Planning: What it takes to make it work

Farming is a labor and time intensive occupation. It is also a business that takes many years to learn and understand effectively. By the time the farmer “gets it,” they are often well into their career and are starting to think about who will succeed them when they are no longer able or interested in completing the many tasks required to maintain or improve upon what they have achieved.

The ultimate legacy they can leave is encouraging and developing the next generation to take over their financially successful operation. This legacy may also be the best thing (both financially and emotionally) that happens to them in their business career.

This next generation can be either family members or non-family members. While the overall transition is similar, there are significant differences that are pointed out below.

Management Authority Transfer – Who makes the small decisions and who makes the big decisions? Transferring management authority starts with delegating the small decisions and (if successful) then moving on to the big decisions. It is hard to start because the senior generation must be willing to place their decision making authority in someone else. It is easy to complete when they realize that the junior generation is capable and eager to assume increasing responsibility.

Legal Ownership Transfer - It is easy to give away a small piece of the ownership, while retaining control of the business. It is hard to give up controlling interest. Note: In most cases I would encourage the transfer of the operating portion of the business as a first step and then commence the transfer of real estate as a second step.

There are five things required of both the senior and junior generations to make a farm transition a success.

What is Required of the Senior Generation?

What is Required of the Junior Generation?

In every business succession there needs to be a due diligence process where the senior generation determines whether the junior generation is competent and capable and whether they will be able to work together effectively during this transition.

In both family and non-family successions the “rules” of the transition need to be spelled out clearly to prevent misunderstandings, especially in family transitions where a misunderstanding may permanently affect not only the business but the family relationship as well.

Working with a Third Party

For many farm business owners, the ability to talk about their future is very difficult, so they put it off until it is too late. They may also be hesitant to negotiate with either the next generation or a non-family person who is interested in gradually acquiring their operation.

For this reason, hiring a third party will help them:

While there is typically a cost of $3,000+ to hire a third party, the experience they bring to this transaction, along with their ability to be sounding boards/mediators to both parties is invaluable.

Even the best laid succession plan needs to be monitored and adjusted as conditions warrant. During the first year, senior and junior generation should meet at least quarterly to discuss progress of the succession compared to the plan and adjust either expectations or the plan accordingly. After the first year, meeting twice a year is a good idea with a minimum of at least an annual meeting.

The use of a third party in measuring progress can be invaluable as they can add an outside observer’s perspective, based on discussion with both parties.

It is never too soon to start the discussion once the senior generation “sees the end in sight,” and has identified potential successors that they feel they could work with.

The senior generation would benefit from speaking with another farmer who has recently gone through the same process, or with a farm business consultant or other expert who has experience in this field, even if it is only a preliminary discussion.

The worst thing that can happen is not starting. The day will come when you are no longer able or interested in continuing your business. At that point there are two options, either close the business or sell the business, neither of which is appealing after a lifetime growing it. 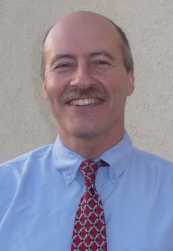