Like a blast from 1993, the Social Security Administration (SSA) has triumphantly reprised its No-Match letter initiative (a.k.a “Employer Correction Request”). When first launched in 1993, the program created widespread confusion, and even panic, among businesses across the country, most notably in agriculture. After a series of lawsuits, the Obama Administration ultimately suspended the program in 2012. As of March 2019, SSA has resumed issuing No-Match letters to businesses throughout the country that have been identified as having at least one W-2 form that contradicts information in SSA records.

Employers, however, should be cautioned that there are a variety of reasons why information contained in payroll records may not match information found in SSA records, and should not take rash action. Issuance of such a letter does not necessarily mean that an employee is undocumented or lacks employment authorization. For example, any of the following events could result in a discrepancy: (1) typographical data entry errors by SSA; (2) reporting errors by an employer or employee; (3) identify theft; (4) errors in hyphenated or multiple last names; or (5) name change due to marriage or divorce.

It is clear that employers receiving a No-Match letter must take proper steps to address such requests, but should not assume that issuance of such a letter is evidence of an unauthorized or undocumented employee. Indeed, an employer can be held liable for employment discrimination if pre-mature action is taken. Such rash action could have the same consequences as non-action. SSA has made clear that employers should not take adverse employment action against an employee solely based on the No-Match letter. SSA includes the following statement:

You should not use this letter to take any adverse action against an employee, such as laying off, suspending, firing, or discriminating against that individual, just because his or her SSN or name does not match our records. Any of those actions could, in fact, violate State or Federal law and subject you to legal consequences.

Why is this? The U.S. Department of Justice Immigrant and Employee Rights Section is the agency charged with enforcing unfair employment practices and workplace discrimination. Title VII of the Civil Rights Act of 1964 prohibits employment discrimination based on a number of factors, including national origin through provisions that prohibit unfair documentary practices on the basis of citizenship, national origin or immigration status. We see this most often in the context of I-9 regulations by restricting employers from soliciting or requesting excessive or unnecessary documents as part of the I-9 verification process. It equally extends to the No-Match letter scenario. If an employer terminates an employee simply because there is a discrepancy in payroll records and in SSA records, this could lead to an allegation of employment discrimination.

It is clear that we are living in an unprecedented culture of enforcement across government agencies. We have seen a shift from employee-focused enforcement actions to employer/workplace enforcement in an effort to eliminate the so-called magnet of our illegal immigration problem. We have seen parallels with the I-9 program as Notices of Inspection/I-9 Audits have skyrocketed to an all-time high. Employers would be well-served to treat SSA No-Match protocols similar to how it addresses I-9 compliance issues.

Information contained in SSA records, including discrepancies, is not automatically shared with other enforcement agencies, including Immigration Customs and Enforcement (ICE). Indeed, federal courts have held that SSA is prohibited from sharing information concerning the names of employers receiving No-Match letters as such information is confidential under tax laws. See Judicial Watch v. SSA, 701 F.3d 379 (D.C. Cir. 2012). Despite this prohibition, however, the U.S. Department of Homeland Security (DHS), including ICE, may request information from SSA for the purpose of identifying and locating aliens in the U.S. and enforcing laws. U.S.C. §552(b)(7). The breadth of this statute in enforcing immigration laws creates much risk for employers.

How should an employer respond? To be clear, receipt of a No-Match letter does not, by itself, constitute constructive knowledge that a named employee is not authorized to work, or is undocumented. At the same time, however, an employer must take immediate steps to remedy the discrepancy. As part of the I-9 audit process, ICE has traditionally requested documentation regarding compliance with No-Match inquiries. Immigration officials may regard an employer’s failure to act on a No-Match letter as evidence of constructive knowledge of unauthorized employment. The employer’s action plan should include the following steps:

I. Initial Receipt of No-Match Letter

If internal review confirms a no-match:

The return of the No-Match letter is a not-so-subtle reminder that we are operating under a robust worksite enforcement regime. It is critical that employers in all industries make compliance a priority and ensure accurate records for wage reporting and I-9 records. Employers may not be able to avoid issuance of a No-Match letter, but can have procedures in place to address the letter when it does arrive. Now is the time to develop compliance programs and enforcement response procedures, whether it be for I-9 or SSA compliance. 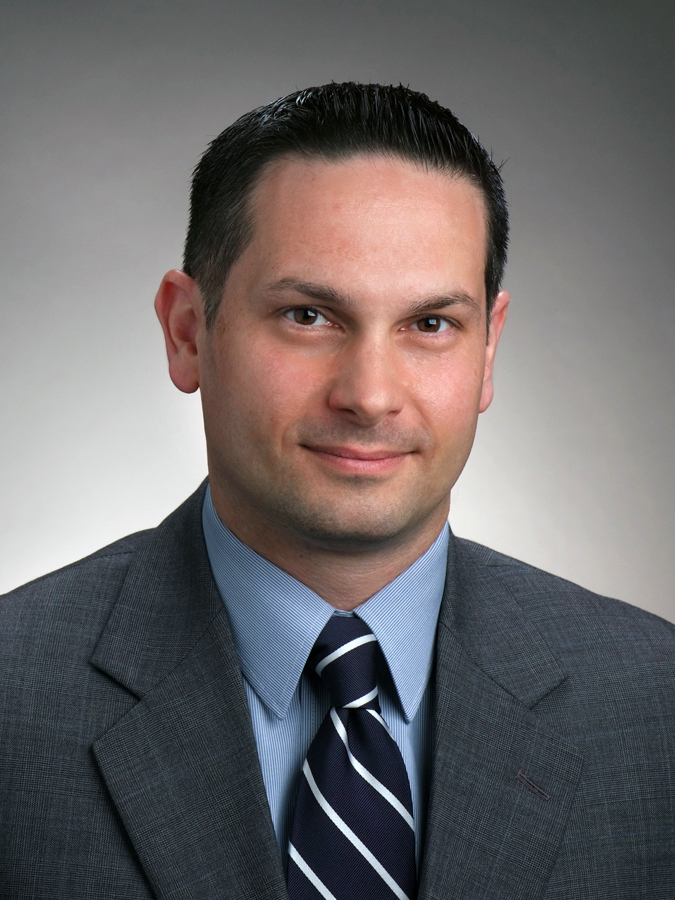 L.J. D’Arrigo is a Partner and Co-Leader of the Immigration Practice Group at Harris Beach, PLLC, one of the country’s Top 250 law firms. L.J. specializes in corporate and professional immigration involving employment-based immigrant and nonimmigrant petitions, labor certification, and family-based immigration. He is nationally recognized for his leadership in the processing of H-2A and H-2B visas for agricultural employers, the landscaping industry, and more, providing guidance to these employers on DOL and USCIS compliance issues.

The USDA recently released the long awaited 2017 Census of Agriculture. The ag census is compiled every five years and gives a detailed look of the current state of agriculture in the United States.

Focusing on farm operations in the Northeast,4 there was a decline of 3,828 operations and 650,406 fewer acres farmed since the last census in 2012. Nearly all Northeast states showed declines, except New Jersey, which saw an increase of 812 farm operations and 19,071 acres added since 2012. This is primarily due to a significant increase in farm operations of less than 10 acres. It is important to note that the Census of Agriculture counts more than full-time commercial farms. Any operation that sells at least $1,000 worth of product annually is counted, so many of the farms included in the census are part-time enterprises. 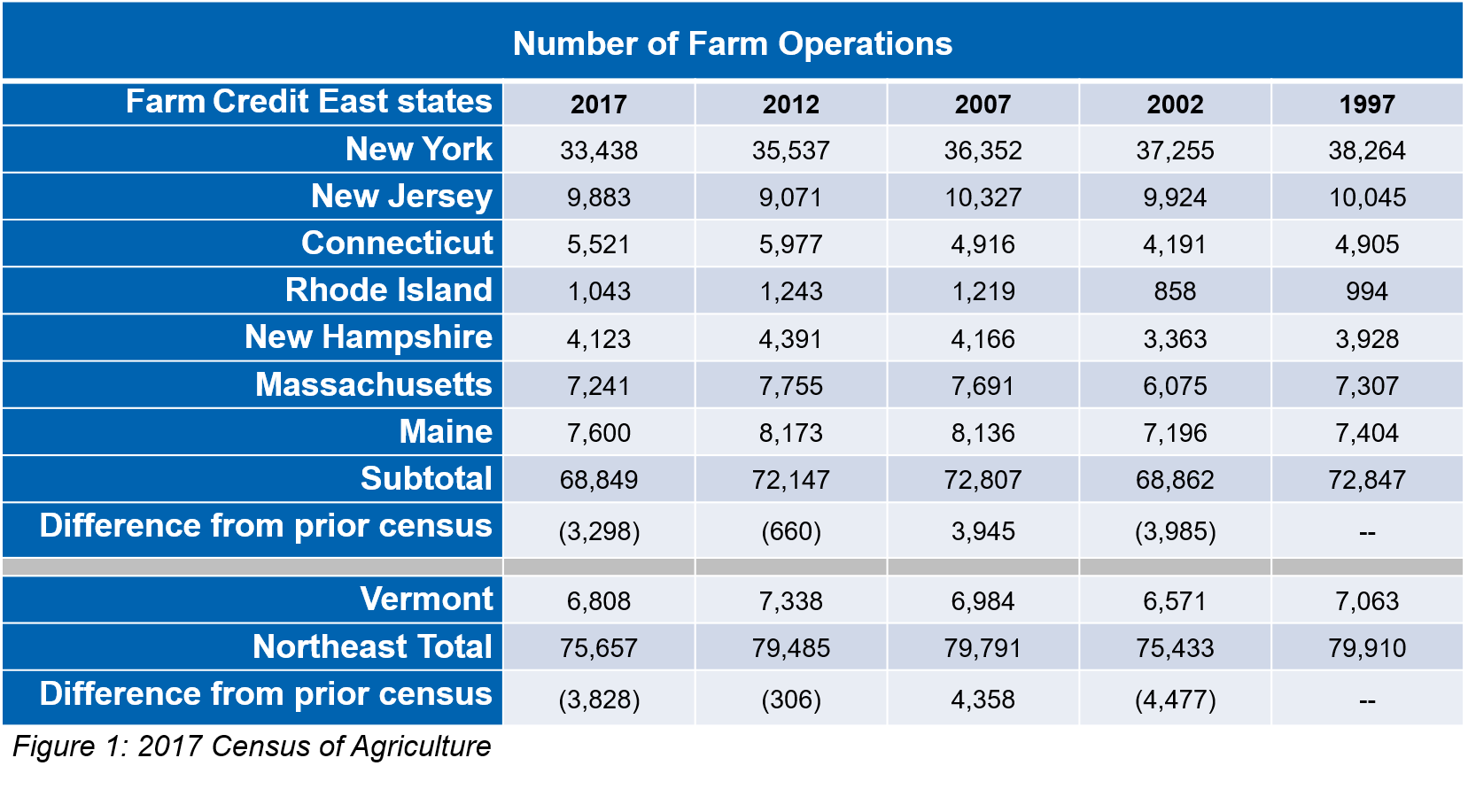 Although other Northeast states saw a decrease in the total number of farm operations, many of them saw growth in the number of small (less than 10 acre) farms. Operations of this size make up around 19 percent of total farms in the Northeast. The largest sector of farms by size are those that range from 10 to 50 acres, making up 31 percent of total farm operations in the Northeast.

It is also interesting to look at the legal structure of farms. Around 82 percent of farm operations are structured as family and individual ownership,5 followed by partnerships at 8.5 percent, then corporations, institutional & research, and other ownership structures.

When looking at acres operated by farms, the 2017 census showed fewer acres of farmland than the prior four census reports. Since the 1997 census, the Northeast has collectively lost 1.3 million acres of farmland. This is due to a variety of reasons ranging from development of rural and transitional areas into non-agricultural uses, to land that is no longer actively farmed.6

The average farm size in the Northeast was 151 acres in 2017,7 very similar to the 152 acres reported in the 2012 census. In total, farms operated on 11.5 million acres across the eight Northeastern states. 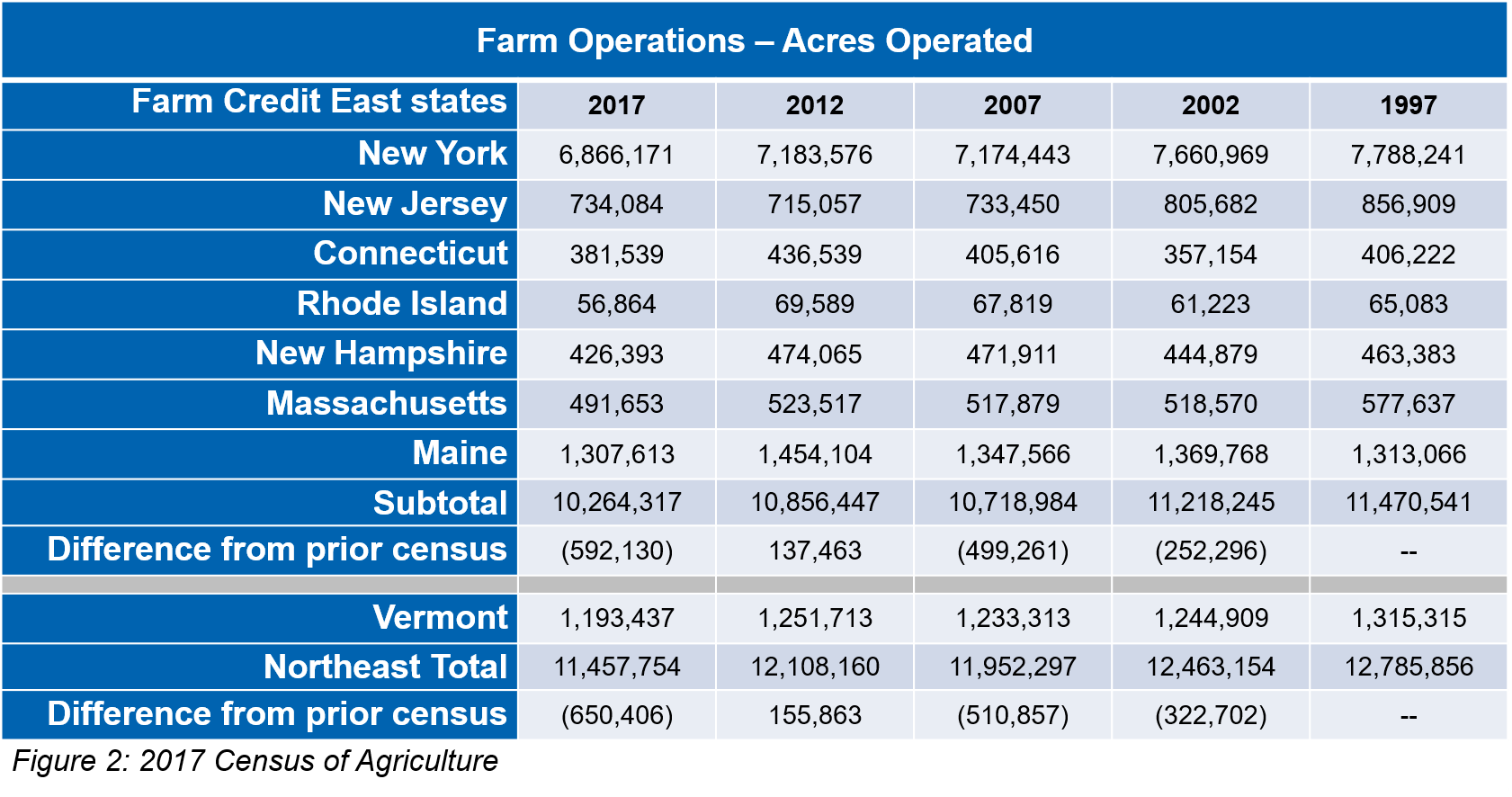 Since the 2012 census, there have been significant changes in the dairy industry throughout the region. Since 2012 the Northeast has 1,221 fewer dairy operations, but increased milk cow inventories by a little over 15,0008 and milk sales by $128 million dollars. New York saw the largest increase in milk cow inventory with over 17,500 added.

A major shift in recent years has been the role of women in agriculture. In 2017, there were 53,047 women operators on the region’s 75,657 farms.11 This indicates the significant role that women have in running and managing farms in the Northeast. Of those 53,047 operators, 24,644 were listed as the primary operators of their farm, or about one-third of all farms. New Hampshire had the highest percentage of female primary operators, at 41 percent.

As the current age of farmers rises, a significant number of farms will transition to the next generation in the coming years. In the Northeast, there are 6,731 farm operations where the principal operator is considered a young operator (less than 35 years of age). A greater number of farms (9,952), had a “young producer” as part of the farm operation, who was not a principal operator, but was part of the farm management team.

The USDA Census of Agriculture is a very important, once-every-five-year snapshot of U.S. farms. It is used by researchers, policy makers and others to glean important insights into what is happening with this critical sector of our economy and society.

This edition of the ag census showed fewer farms and fewer acres in farmland nationwide as well as in the Northeast. The average age of farm operators continues to climb, but so has the number of young and beginning farm operators, a reflection of changes in agriculture as well as broad demographic trends. The increase in number of female producers reported confirms the significant role that women play in agriculture both nationally and locally.

Most states reported greater numbers of very small and large farms, and fewer numbers of farms in the middle. This shift in farm size suggests a rise in the number of part-time and niche producers, as well as the continued consolidation among full-time farms; as some producers decide to exit, their properties are often purchased by neighboring farms that wish to expand.

Finally, net cash farm income increased in the Northeast between 2012 and 2017, indicating growth in productivity as well as profitability of the region’s farms. For more information on the 2017 Census of Agriculture, visit Nass.usda.gov/AgCensus/.

1 For the purposes of the ag census, a “farm” is an operation that normally sells at least $1,000 worth of product annually.
2 Operations could report up to four operators.
3 “New Farmers” are those operators who have farmed for 10 or fewer years.
4 The Northeast includes the states of New York, New Jersey, Connecticut, Massachusetts, Rhode Island, New Hampshire, Vermont and Maine.
5 Farm Operations: organization, tax purposes.
6 While broad trends in the ag census over time are highly likely to be accurate, minor differences in numbers between census editions may occur because of changes in methodology and statistical adjustments made to compensate for nonresponses and misclassified farms.
7 Area operated, measured in acres / number of operations
8 Cattle, Cows, Milk-Inventory
9 Milk-Operations with Sales
10 Milk-operations with sales / Milk-Sales, measured in $
11 Farms could list up to four operators per farm