Given ongoing trade discussions with multiple countries, it can be hard to keep up with what’s going on between the United States and our major trading partners. Here’s a rundown of some recent events in the agricultural trade arena.

The United States-Mexico-Canada Agreement (USMCA), or “NAFTA 2.0,” is more than a year old, but has yet to be ratified by the legislatures of the U.S. and Canada (Mexico ratified the agreement in June).

The agreement became an issue in Canadian politics where incumbent Prime Minister Justin Trudeau narrowly won re-election on October 21. Meanwhile in the U.S., its prospects for approval are uncertain.

In Canada, while Trudeau signed the deal, it faces a rocky road in Parliament as the Prime Minister’s Liberal party is now in the minority. Andrew Sheer, of the opposition Conservative party, has come out against the pact calling it a “failure,” and an embarrassment for Canada. While the U.S. dairy industry supported key provisions in the agreement increasing access to the Canadian market, Dairy Farmers of Canada called the deal “deeply troubling.” The Conservative surge in Canada’s election may not spell the end of the USMCA, but it does open the door to new negotiations in Parliament.

Here at home, House Democrats have concerns with several key parts of the agreement, including extension of pharmaceutical patents, environmental standards and labor provisions. Ratification by Congress does appear increasingly likely as negotiations continue between the House of Representatives and U.S. Trade Representative Robert Lighthizer, but nothing is certain until the deal is final.

Farmers and ag groups, for their part, generally support the agreement, hoping it will bring some certainty to our trade relationships with the U.S.’s two most important export customers.

On September 25, the U.S. and Japan agreed to a significant trade deal after resolving some last-minute concerns from Japan regarding tariffs on Japanese-made cars and auto parts.

Many U.S. agricultural exporters have been concerned about trade with Pacific Rim nations since the U.S. pulled out of the Trans-Pacific Partnership (TPP). While the remaining members of the TPP have forged ahead with the multi-nation agreement, the U.S. has been trying to develop individual agreements with some of the member nations, including Japan.

The agreement could prove beneficial to U.S. agriculture – it provides increased access to Japanese markets for U.S. farm products, along with bilateral cuts in tariffs on industrial goods. Citing the agreement, the Administration has refrained from imposing possible 25% tariffs on Japanese cars, the largest component of U.S.-Japanese trade.

Japan, the world’s third largest economy, represents a significant market for American farm products, averaging $11 billion in purchases annually over the last 20 years. This is despite an average 17.3% tariff on U.S. ag products, which would be significantly reduced for most categories in the new agreement.

Under the agreement, Japan will eliminate all tariffs on almonds, blueberries, broccoli, sorghum, sweet corn and walnuts. Tariffs will be reduced for beef, cheese, ethanol, oranges, pork, whey and wine. For example, Japan’s 38.5% percent tariff on beef imports will be reduced to 9% over a multi-year period. Finally, Japan agreed to establish new import quotas for U.S. corn starch, fructose, glucose, malt, potato starch and wheat. Rice, a politically sensitive crop for Japan, was not included in the deal. Currently, rice imports above a 350-ton quota face a 600% tariff.

For dairy, the deal is somewhat mixed. Japan agreed to give TPP-level tariff treatment to about 80% of U.S. dairy products exported to Japan, but there are a few categories where U.S. negotiators were unable to improve access. Still, the International Dairy Foods Association called the deal “a step in the right direction.”¹ Most dairy products sent to Japan currently face a tariff of approximately 30%. This tariff rate will be reduced to zero over a period of years, ranging from 5 - 15 years, depending on the product.

China has been at the center of global trade disputes. As the world’s most populous nation and second largest economy, China is a major importer of agricultural products, and its buying patterns significantly influence world markets.

Trade between the U.S. and China, exceeding $600 billion per year (counting trade both ways), is significant. In 2013, U.S. agricultural exports to China totaled $25 billion, more than 17% of total U.S. ag exports. China has historically ranked among the top customers for several U.S. ag commodities:

Given the size of the Chinese market, reaching an agreement is critical for U.S. agriculture.

However, for more than a year, there has been a back-and-forth of tariffs and trade disputes between the two nations. On August 1, the U.S. announced the imposition of new 10% tariffs on $300 billion of Chinese imports, in addition to the 25% tariffs already levied on $250 billion worth of Chinese goods. The U.S. has postponed one tariff increase, previously scheduled for October 15, in an effort to support ongoing dialogue, but another increase remains tentatively scheduled for December 15.

When the escalation of trade tensions began, China announced a halt to its already reduced purchases of U.S. agricultural products and allowed its currency to weaken against the U.S. dollar, making U.S. products more expensive in China. Since then, several rounds of successively higher tariffs have been threatened by both sides in tit-for-tat exchanges between the two nations. At this point, there is little traded in either direction between the U.S. and China that is not subject to some level of import tariffs.

China, for its part, has reached out to the U.S. ag community indicating that it is anxious for trade relations to normalize, and to increase purchases of American ag products. The nation offered a gesture of goodwill on September 13, by agreeing to exempt some American soybeans, pork and other agricultural products from additional tariffs to ease tensions. However, Chinese agriculture Vice Minister Han Jun has commented that “the longer the trade war goes on, the more supply chains will change, along with available markets.”² There have been announcements at various points of major Chinese purchases of U.S. ag products, but actual shipments of product have not always materialized.

Between tariffs and a slowing economy, Chinese imports of U.S. products have fallen significantly in the past year, and not just for farmers. United States hardwood exports to China have dropped by 40% so far this year after years of consecutive increases. The U.S. sent 54% of its exported hardwood to China in 2018.³

Lobster exports to China, which have come primarily from Maine, are off by more than 80% for the first half of 2019, more than $70 million behind where they were last year.⁴

Certainly, American farmers, fishermen and forest product producers are hoping for a timely resolution to these ongoing issues, and if recent positive comments from both the Chinese and American sides are to be believed, a deal may be possible later this year. 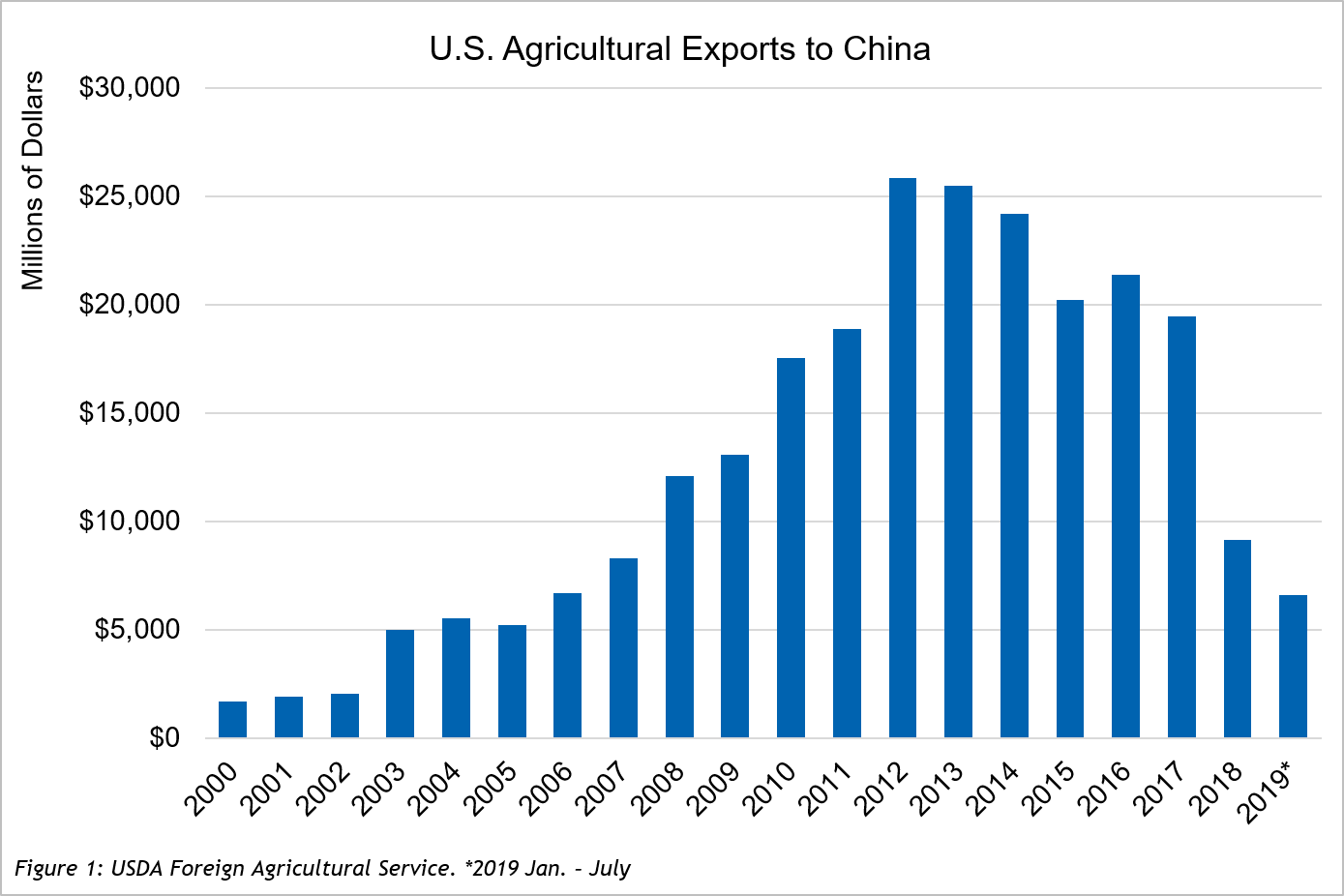 Crop Insurance for Organic Farms: Time for Another Look?

Organic farming is one of the fastest growing segments in Northeast agriculture, with organic sales tripling from 2012 to 2017, increasing from $322 million to $1.1 billion. The Risk Management Agency (RMA) recognizes this rapidly growing segment of agriculture and has dedicated extensive resources to expand the available crop insurance coverage for organic producers. Crop insurance allows producers of a wide range of agricultural products to protect against weather and market-related losses.

Crop insurance participation by organic growers has typically been quite low in the Northeast, but several improvements in the coverage available have occurred in recent years. If your farm is organic or transitional, now might be time for a second look at the programs available to manage your weather or market risk.

Multi-Peril Crop Insurance (MPCI) provides coverage for both yield and/or revenue. Utilizing a MPCI policy requires the producer to establish a minimum of four years of production history. Production history can be established utilizing the producer’s actual records or a percentage of the county Transitional Yield.

Fruit and vegetable producers that are certified organic have several options to insure their crops at a price that is reflective of the value they receive. Producers can elect to insure between 50-85% of their yield and/or revenue at 5% increments by participating in a MPCI policy utilizing the Organic Certified price election (if applicable), the Contract Price Addendum if the crop is contracted, or they can participate in the WFRP program.

Grain producers that are certified organic have several options to insure their crops at a price that is more reflective of the value they receive. Producers can elect to insure between 50-85% of their yield and/or revenue at 5% increments by participating in a MPCI policy utilizing the Organic Certified price election, the Contract Price Addendum if the crop is contracted, or they can participate in the WFRP program. 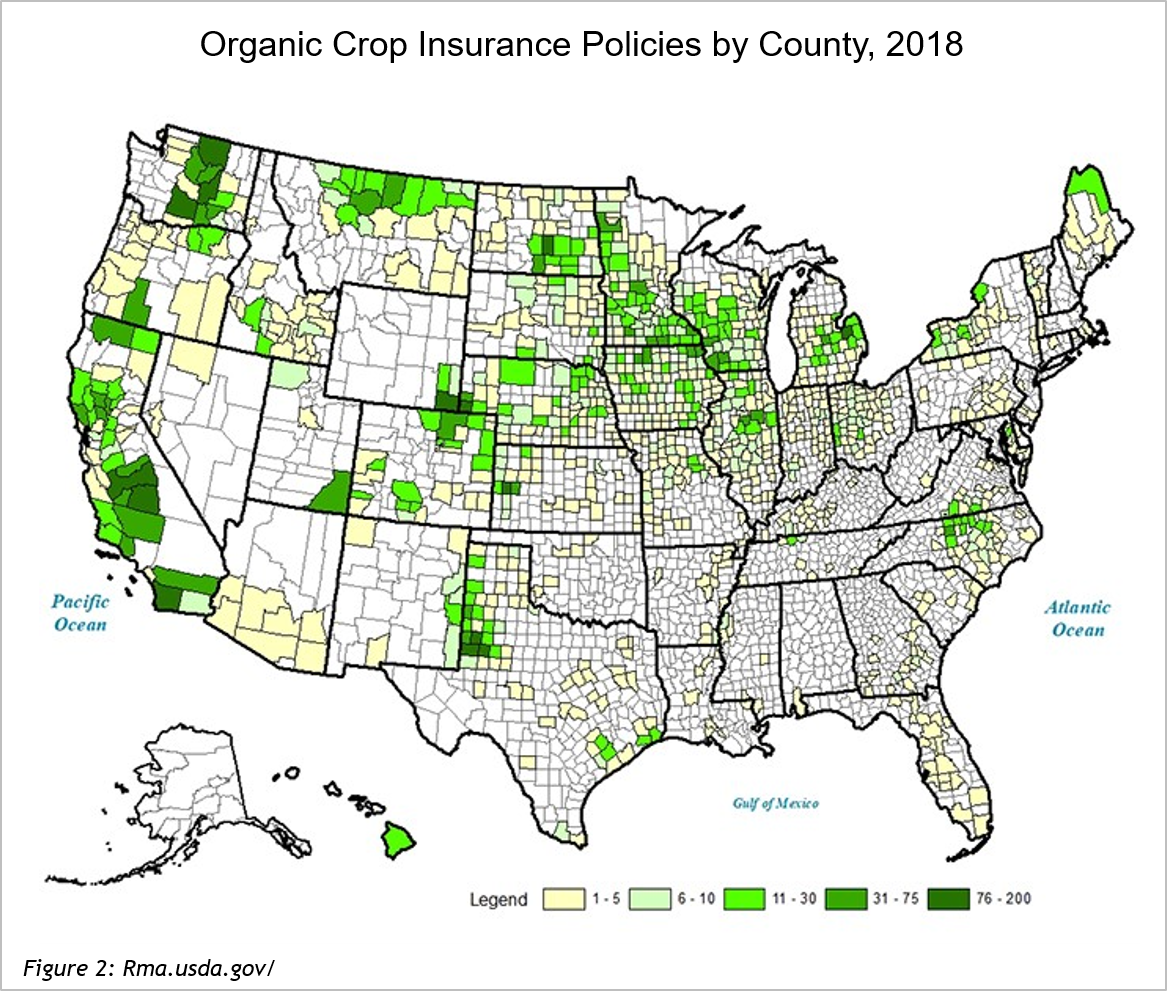