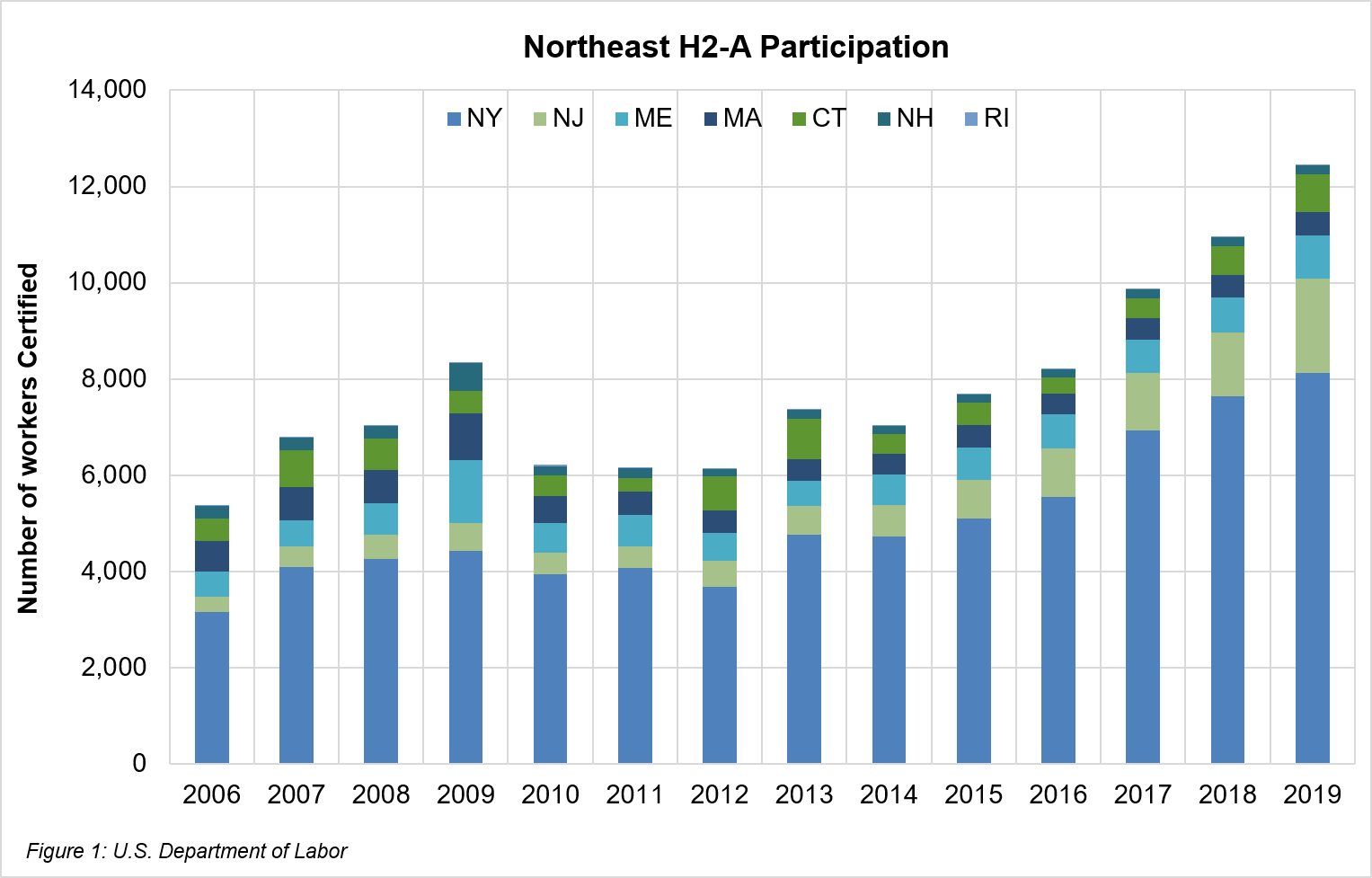 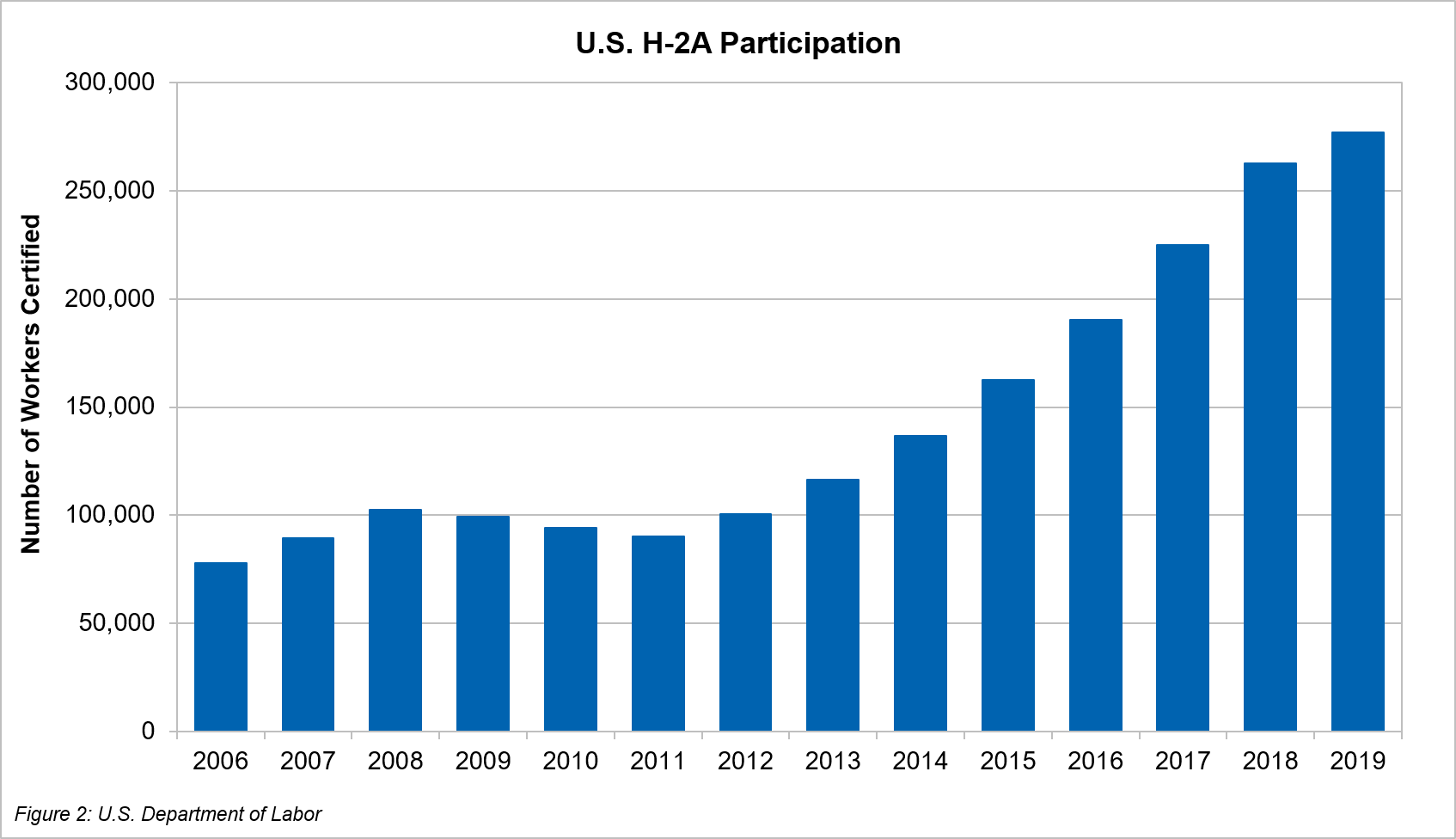 In addition to bringing in more workers, producers are also paying higher hourly wages. Workers brought in on H-2A visas must be paid at least the Adverse Effect Wage Rate, which is defined as “the annual weighted average hourly wage for field and livestock workers (combined) in the state or region as published annually by the U.S. Department of Agriculture based on its quarterly wage survey.” This rate has increased significantly in recent years, rising by 27% since 2015 for most Northeast states, see Figures 3 and 4. 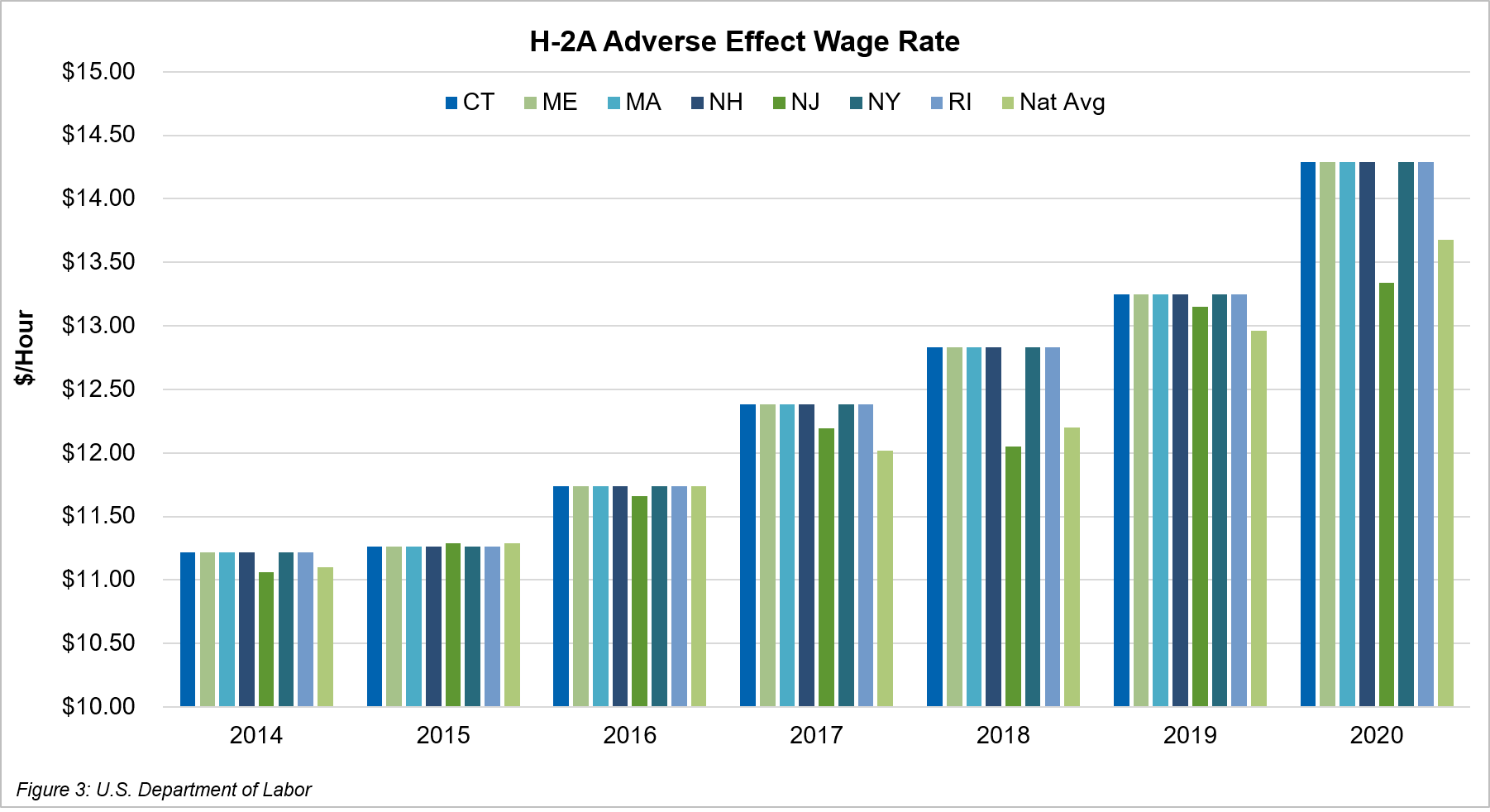 One of the driving forces behind the rise in H-2A utilization is the increasingly tight national and local labor market. With unemployment close to a 50-year low in many states, finding workers has been increasingly challenging for businesses of all types, including agriculture.

While H-2A wage rates have increased, agricultural employers in many states are facing higher labor costs whether they use the temporary visa program or not. Producers in several Northeast states are dealing with significant increases in the minimum wage. Labor market rates are also higher for all types of workers due to low unemployment.

While workers’ hourly rates have increased, market prices for many agricultural products have been relatively flat. This has required producers to try to gain efficiencies and optimize how they use labor, otherwise, the combined effect of flat prices and rising labor costs is a reduction in producers’ margins.

Higher hourly rates coupled with increased eligibility for overtime – particularly in states like New York and Massachusetts – has caused some farms to limit workers’ hours in an effort to contain costs. Other farms have invested heavily in mechanization and other efficiency measures. Some producers may have to reexamine particularly labor-intensive products or practices on their farms to see if they still make sense given higher costs.

Certainly the cost and limited availability of agricultural labor continues as perhaps the most significant issue facing Northeast producers today.

According to media reports, a Chinese trade delegation planned a visit to Washington D.C. on January 13 to sign the U.S.-China “Phase One” trade deal.

Assessments of the actual impact of the Phase One deal differ. The Administration has referred to the deal as “very large and comprehensive,” but other accounts suggest a more limited agreement.1 In any case, even if the deal fails to resolve some major issues between the two nations, it does mark a significant de-escalation of the trade war between them.

One major part of the agreement is to avoid the escalation of tariffs the U.S. had scheduled to take effect on December 15, 2019 (a 15% tariff on consumer goods such as shoes, computers, toys and more). In addition, the U.S. agreed to remove some of the existing tariffs placed on $360 billion worth of Chinese goods in stages. Initially, the U.S. would reduce the tariff on $120 billion of goods from 15% to 7.5%. Tariffs on another $250 billion of goods including machinery, electronics and furniture, will remain at 25% for now.2

The Administration suggests that as a result of the agreement, China’s purchases of U.S. farm goods are expected to grow to exceed $40 billion annually for at least two years. However, some analysts are skeptical that China will actually purchase this amount, noting that China has never before purchased such a large amount of American agricultural products. The statements by the Chinese government did not mention specifics, stating only that their ag purchases would increase by a considerable margin. At its peak in 2013, U.S. exports to China came to $29 billion. 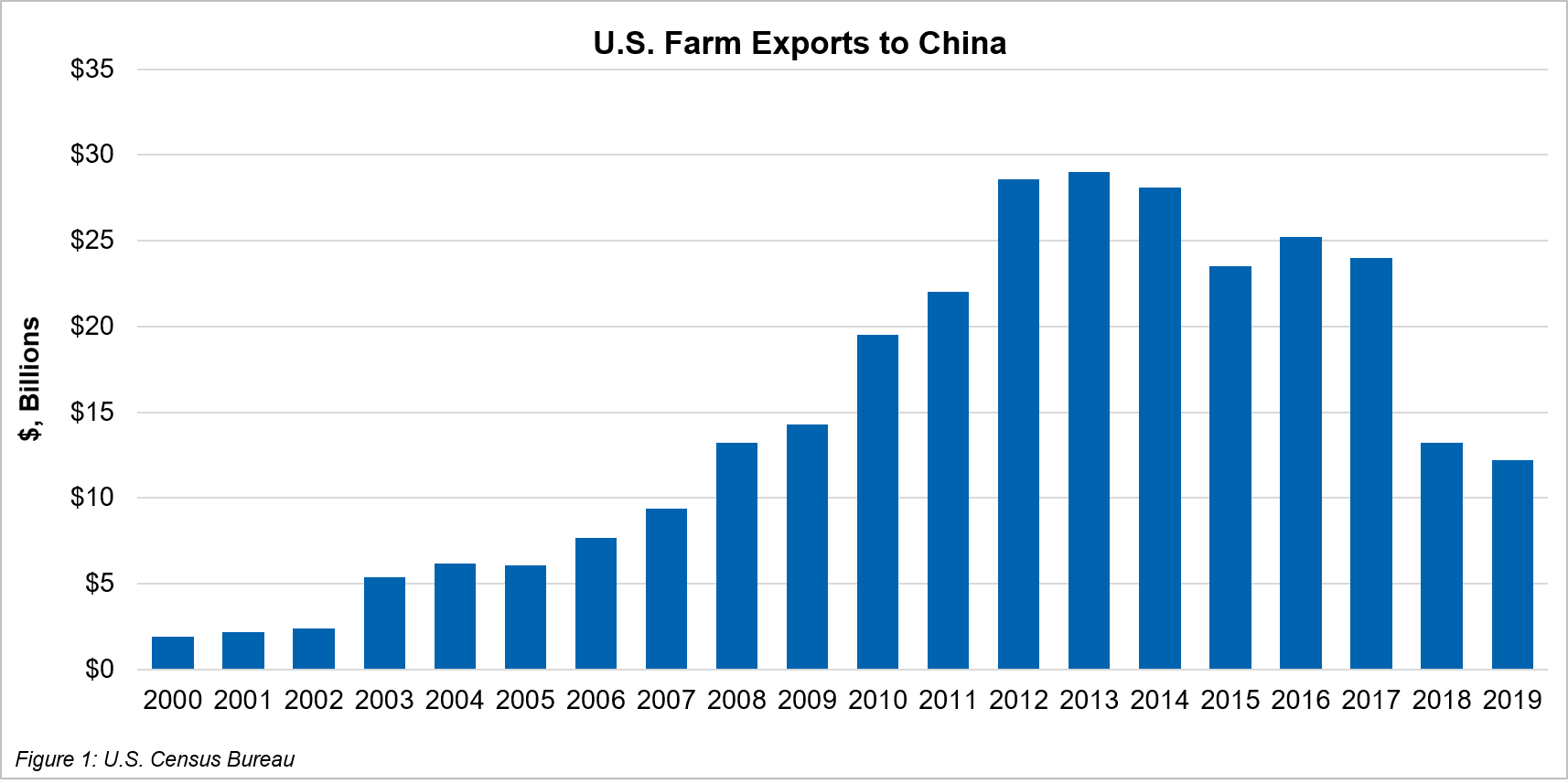 The U.S. has been seeking major changes to a number of Chinese economic policies and their mutual trading relationship as part of their negotiations, but they have largely been beyond the scope of the Phase One agreement. In admitting the limited nature of the current agreement, U.S. trade negotiator Robert Lighthizer stated, “There are still a lot of outstanding issues that you’re all aware of between the U.S. and China, which are very serious…our sense is that we’re better off doing this in phases than to sit and make no progress at all.”3

While this Phase One deal leaves many issues with China unresolved, it may represent a turning point in the ongoing disputes with one of our country’s most significant trading partners.