In 2020, the net income outcome for dairy farms depended on three factors: whether they signed up for risk management programs, how much they received in government payments, and where their milk was shipped.

The Dairy Margin Coverage (DMC) program generated some large payments in the spring months and was potentially a boon for small or medium sized herds with what is effectively a cap at five million pounds of production. Dairy Revenue Protection (DRP) provided significant indemnities for many who enrolled, but that depended very much on timing and contract specifics.

Government payments to dairy farmers in 2020 were primarily comprised of Coronavirus Food Assistance Program (CFAP) payments, which averaged $2.45/cwt of milk depending on farm organization and payment limits. Finally, the coronavirus pandemic made winners and losers up and down the food chain depending on factors such as the market outlet (food at home vs. away from home).

The level of uncertainty around milk prices in 2021 is exceptionally high. Until COVID-19 is under control, the economy simply cannot revert back to normal activity in many sectors. This puts a drag on any business that relies on face-to-face interaction for commerce and also means that government purchases are important to fill demand.

The Food Box program purchased approximately one percent of the total butterfat produced domestically in 2020, which significantly affected markets. These purchases were important in supporting milk prices and limiting dairy stock growth as well as feeding needy families.

SNAP benefits can, of course, be used to purchase dairy products but are unlikely to result in as much dairy products purchased as the Food Boxes. A recent study concluded that about 13.5% of SNAP expenditures were spent on dairy products, meaning that Food Box expenditures, on average, spent about 50% more on dairy than SNAP. It is possible that the Biden administration will continue the Food Box as it was used in 2020, but if the administration moves toward a different model, such as increasing SNAP, it could have implications for the milk price.

Another important demand consideration is export markets. U.S. dairy exports were strong in 2020 with China and Southeast Asia generating particularly strong demand. China’s economy, in particular, recovered the last two quarters of 2020 resulting in an annual GDP growth rate of 2.3%. GDP growth in 2021 for China is supposed to approach, or even exceed 8%, which may encourage further dairy product demand.

The most important destination for U.S. dairy exports is Mexico and their economy is struggling mightily with COVID-19. Cumulative U.S. dairy exports to Mexico declined by more than 15% in volume terms in 2020. Additionally, other major dairy exporters including the EU and New Zealand have made in-roads into the Mexican market in recent years after signing new trade agreements. Continued U.S. milk production growth will require exports to balance supplies.

Milk production ramped up in the second half of 2020 and investments made with government payments are likely to encourage milk production into 2021. U.S. milk production in December 2020 was 3.1% higher than a year earlier. This growth was generated by increasing the national milking herd by more than 100,000 cows (+1.1%) and increasing milk per cow by 2.0%. The need to balance increasing milk supply has resulted in significantly higher butter stocks to finish 2020, which will overhang the market in 2021.

A key factor to watch on the supply side is feed prices. The current forecast for feed prices — most notably corn and soybeans — are for the highest prices in many years. Weather events in the southern hemisphere coupled with exceptionally strong demand from China have conspired to pull down stocks and produce $5/bu corn and $15/bu soybeans. Ultimately, these feed prices will depend on acres planted and weather in summer 2021 but it bears watching. Historically, U.S. farmers have been very good about finding corn and soybean acres. Another effect of high feed prices, if they continue, will be the potential to trigger DMC payments.

While the futures markets are not particularly good at forecasting sudden changes due to supply or demand shocks, they are very efficient at forecasting average price level in general. At the current time, the futures market is forecasting about $16.56/cwt for Class III and $13.91/cwt for Class IV. The uncertainty in the market is evident in how much milk production and government program announcements generate large futures price changes. The question for any given farm then becomes what the "basis" and net milk price will be, which depends on the pool value and many other factors, including risk management programs.

New England is home to the most valuable fishery in the United States, primarily due to lobster and scallops. Lobster landings were worth $684.3 million in 2018. Approximately 90% are landed in Maine, with 7 or 8% landed in Massachusetts.

From May through the first half of August, wholesale lobster prices fell up to 46% below the 5-year average. Prices recovered in the second half of 2020 due to lower than expected landings and higher than expected demand. This outcome was not foreseen last spring, when many lobster fishermen contemplated parking their boats due to fear of market prices not covering their costs.

Landings in Maine have been trending downward over the past few years. Although data for 2020 is not yet available, most observers in the industry think landings will be significantly below 100 million pounds for the first time in nine years. 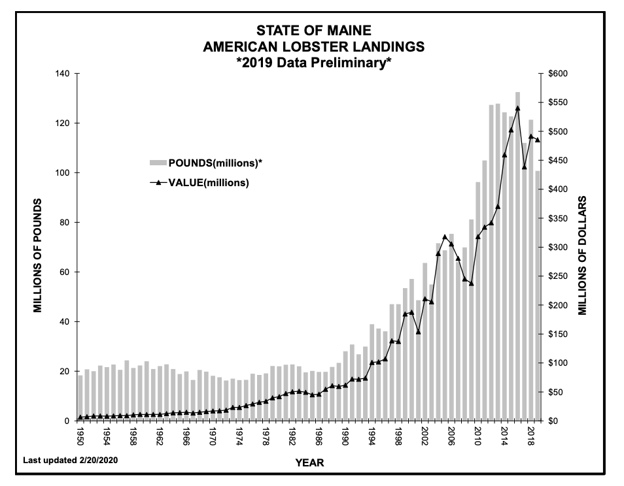 The silver lining of the pandemic for the New England industry, and for seafood producers across the country, has been the increase in seafood consumption, even accounting for losses in restaurant sales.

According to recent figures from the National Fisheries Institute’s Global Seafood Marketing Conference, in 2019, seafood sales were split 50/50 between retail and foodservice or restaurants. This has been true for decades.

In 2020, for frozen seafood, the foodservice share fell to 36%, while the retail share grew to 64%. In dollar terms, retail grew 37% while foodservice declined 24%. The result was a net gain in overall sales across the entire seafood category of around 8%.

One of retail seafood’s biggest winners was lobster, where retail sales soared 87% based on Nielsen IRI data. This dramatic shift in demand explains why lobster prices recovered to more normal levels in the second half of 2020.

The lobster fishery has been strongly impacted by global warming. Oceanographic features mean the Gulf of Maine has been warming faster than practically any other ocean area on earth. The lobster population has been moving north, as they seek colder waters. The nine years of over 100 million-pound landings in Maine came about as more lobsters moved into areas open to fishing. Meanwhile, landings along the southern coast of New England and in Long Island Sound have declined.

There is no guarantee that lobsters will stop moving. Maine could experience a decline in landings as a greater portion of lobsters migrates to Canadian waters in the coming years. The recent declines may be a harbinger of this, but it is too soon for firm conclusions.

The lobster industry in Maine also faces another problem due to climate change: increased interactions with the critically endangered North Atlantic right whale.

There are only about 400 remaining North Atlantic right whales. Since 2017, the National Oceanic and Atmospheric Administration (NOAA) estimates about 40 have died. While climate change may be the species greatest threat, the most visible causes of mortality are ship strikes and fishing gear entanglement. The added weight of lines and traps weakens the whale and, in some cases, leads to starvation. Aerial surveillance shows approximately 25% of the population gets entanglement scars each year.

In an attempt to reduce these entanglements, Maine fishermen have adopted weaker breakaway lines, and recently began using a marking system to identify any gear from Maine seen in an entanglement. But the large scale of the Maine lobster fishery requires that it be part of the primary solution for protecting right whales.

More regulation may be coming: A lawsuit brought by environmental groups in the spring of 2020 successfully argued that NOAA, the federal agency that regulates fishing, has failed to sufficiently protect the whales. NOAA regulations require fisheries not to cause additional mortality to endangered species.

The lobster industry may not have many choices in responding to this crisis. The Marine Stewardship Council (MSC), a nonprofit which certifies seafood as sustainable, suspended its certification for Maine lobster after the lawsuit, but not for Canadian lobster. Many retailers require their suppliers to either be MSC certified, or to have some equivalent protection plan in place. Without an acceptable way forward, the Maine industry may be at a disadvantage in the retail marketplace, especially as Canadian suppliers could continue to meet demand.

Maine fishermen argue that they are not the primary cause of the right whale problem yet are being asked to bear the greatest costs for mitigation.

Other New England fisheries experienced much the same roller coaster as the lobster fishery this past year.

Scallopers, whose products are also highly dependent on foodservice, initially saw lower prices which have since recovered. Scallops are the fourth most valuable fishery in the U.S. and have made New Bedford, Massachusetts consistently the highest value port in the nation.

Fresh seafood also had distribution hiccups. However, the overall increase in demand for seafood was a rising tide that has helped most of the industry.

The one sector substantially left behind has been shellfish aquaculture. In Massachusetts, which harvests around 50 million farmed oysters per year, the State’s Division of Marine Fisheries says that between May and October, sales were down 43%. Many unharvested oysters have grown too large for their normal markets, further losing value, and acting as a drag on farmers ability to restock next year.

Oysters have not been able to make the jump to retail seafood because shucking an oyster is simply not a skill that many Americans can master. The industry boomed on a surge in oyster bars, as young people embraced oysters more than most other seafood. But this all took place in the social context of bars and restaurants and did not transfer to home consumption. The pandemic will undoubtedly drive a significant number of small oyster farms out of business, which is likely to be a longer-term consequence for the New England aquaculture industry.