Farming, fishing and forestry are some of the United States’ key export industries. By volume, more than 20% of total U.S. agricultural production is exported. In the Northeast, more products are consumed domestically, but we still export a significant amount. And even in cases where Northeast producers are selling to local markets, export demand has a significant effect on market prices. So, whether your production is headed to the next town or around the world, exports matter.

Between numerous trade disputes with multiple countries and the COVID-19 pandemic, U.S. exports of all types were seriously disrupted in recent years. We saw this with a number of products including corn and soybeans, hardwood logs and lumber, lobster, dairy products, and value-added food products.

However, as the impact of COVID-19 subsides and trade tensions ease, U.S. agricultural exports have surged. A notable development has been the implementation of the U.S.-China “Phase 1” deal, inked in January 2020. In the agreement, China promised to significantly ramp up purchases of U.S. products overall, including $32 billion in additional agricultural purchases over two years. While China’s purchases were initially well below the target levels, they significantly increased their imports in late 2020. This resulted in a near-doubling of China’s U.S. agricultural purchases in 2020 compared to 2019, increasing from $13.9 billion to $26.5 billion.1 The USDA forecasts that China’s U.S. ag purchases will continue to increase in 2021, to a record $31.5 billion.2 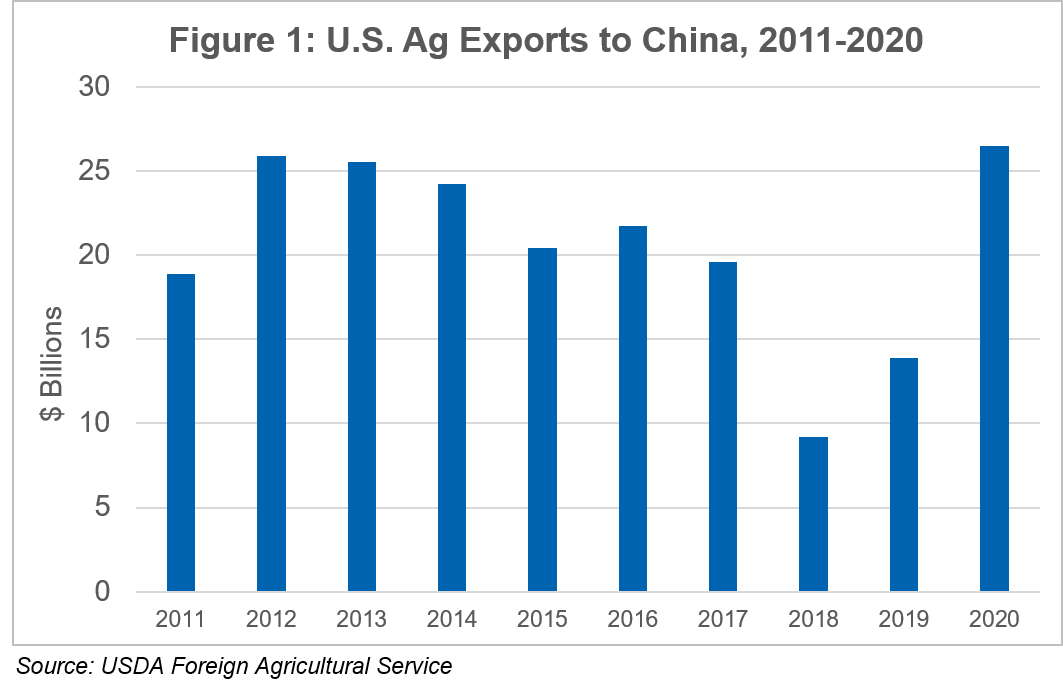 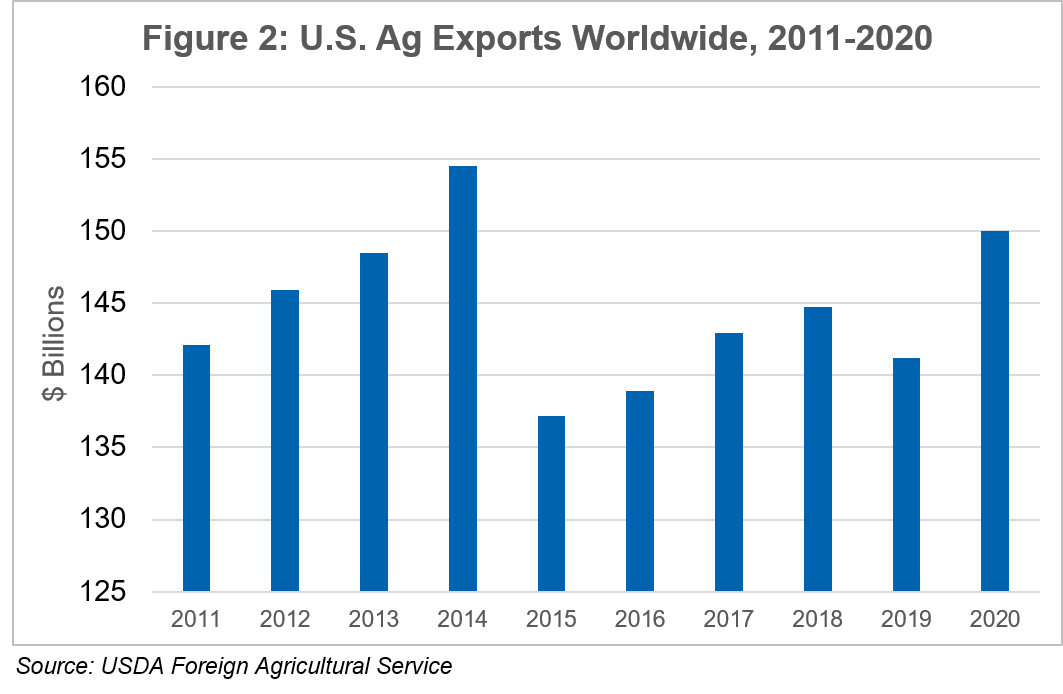 China’s increased buying has continued in 2021. In the first eight weeks of the year, China has purchased nearly triple the amount of U.S. soybeans by volume compared to 2020, and prices for the oilseeds are up 64%, year-over-year. The cooling of trade tensions and the Phase 1 agreement may be part of the reason for the surge in exports, but fundamentals of the Chinese market could be the primary driver. China’s stocks of grains and oilseeds are at low levels, and its efforts to rebuild the country’s hog herd after the decimation caused by African Swine Fever are supporting rising demand for animal feed.

The USDA forecasts record U.S. ag exports worldwide in 2021, at $157 billion. Soybean exports are forecast at a record $27.4 billion, corn exports at $14.0 billion, and wheat at $6.9 billion, all well above 2020 levels. These increases, coupled with relatively flat imports, results in a projected U.S. agricultural trade surplus of $19.5 billion for the year.

While China’s return to the top spot as America’s chief customer for agricultural exports has been welcome news to U.S. farmers, congestion at ports and a surge in demand for shipping resources are cause for concern. Global shipping significantly declined due to the COVID-19 pandemic, creating pent-up demand, and as the world emerges from the pandemic, shippers are scrambling to keep up. With container space at a premium, many shippers have prioritized their most lucrative routes, leaving lower-value export goods stranded.

Under normal circumstances, the large volume of goods traveling from Asia to the U.S. compared to goods flowing the other way increases the cost of containers from Asian ports to the U.S. Therefore, there is often a surplus of containers traveling back to Asian ports, so U.S. exporters can obtain them inexpensively. This allows for the export of lower-value products such as raw agricultural commodities like grains, hay, logs and lumber, and other products.

Currently, Asia’s demand for containers is so great, and delays at ports so significant, some shippers are choosing to forego the low back-haul container rates for U.S. exports and instead immediately return empty containers to China and other Asian ports to be filled with more profitable merchandise heading back to the U.S.3

Additionally, some U.S. ag exporters are concerned that overreliance on China could distract from efforts to court buyers in other export markets, such as other Asian countries, the Middle East and elsewhere.

The surge in foreign demand for agricultural products has buoyed feed commodity prices. Corn for May delivery is currently trading at $6.50/bu, compared to $3.45/bu at this time last year. Soybeans are at $15.33, 82% higher than last year’s price of $8.43.

The increase in feed commodity prices has some in the dairy and livestock industries concerned. With overall U.S. grain and oilseed exports forecast for their strongest year in at least five years, feed costs are predicted to rise domestically. The USDA’s Economic Research Service has increased their all-milk price forecast to $18.40/cwt, a 65-cent increase over their March forecast. Still, much of that increase will likely be consumed by higher feed costs.

The number of foreign agricultural workers in the U.S. under the H-2A visa program has significantly increased in recent years as it has become harder for producers to find domestic workers. While the program still supplies only about 10% of farm labor nationwide, H-2A employment increased fivefold between 2005 and 2019.1 Along with an increased number of workers has come increased costs. The wages H-2A employers are required to pay, known as the adverse effect wage rate (AEWR), have increased by 46% over the same period, using the New York AEWR as an example.2

Employers seeking to employ foreign workers under the H-2A temporary work visa program are required to offer, advertise in their recruitment, and pay wages at least equal to the AEWR applicable to the employer’s job opportunity. For most H-2A job descriptions, the wage offered and paid to H-2A workers and workers in corresponding employment must equal or exceed the AEWR, the agreed-upon collective bargaining wage, or the applicable minimum wage imposed by Federal or State law or judicial action, or any agreed-upon collective bargaining rate, whichever is highest.3

The significant increase in the AEWR over recent years has drawn controversy, as some farm employers have pushed back on increases, while others argue the wages should be increased further.

In November, the Department of Labor announced that the AEWR would remain at the 2020 level through 2022, after which it would be adjusted by the employment cost index for wages and salaries as determined by the Bureau of Labor Statistics. This announcement, however, was met with legal challenges, and eventually overturned by the courts, who ruled that in addition to eliminating the proposed two-year freeze, the department must return to its previous methodology for determining the AEWR, which has resulted in this year’s rates.