Inflation: Temporary 'Growing Pains' or a Worrisome Sign of a New Trend?

According to the U.S. Bureau of Economic Analysis, real gross domestic product (GDP) increased at an annualized rate of 6.4% in the first quarter of 2021.1 In “normal” times, this would be truly outstanding. If we take the wild swings of 2020 out of the equation, this 6.4% quarterly figure would be the highest level of growth since 2003. 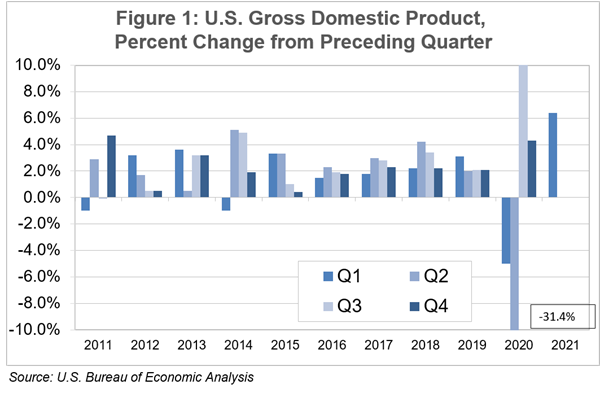 Context is everything, however, and we can’t overlook the impact of the COVID-19 pandemic on the economy. Prior to COVID-19, the economy had been on a long, slow-but-steady trend of economic growth, going back to the recovery from the Great Recession of 2008-09. Then in the first four months of 2020, the economy took a staggering hit as businesses shut down and only those deemed essential were able to remain open. There was a similarly dramatic rebound in the third quarter of 2020, as many businesses were able to reopen at some level of capacity.

Since October 2020, we’ve continued to see economic recovery at an encouraging rate, but it’s illustrative to look at a linear chart of U.S. GDP rather than quarterly changes. Looking at Figure 2, one can clearly see that despite a strong upward trajectory, the total U.S. GDP remains below pre-COVID levels. 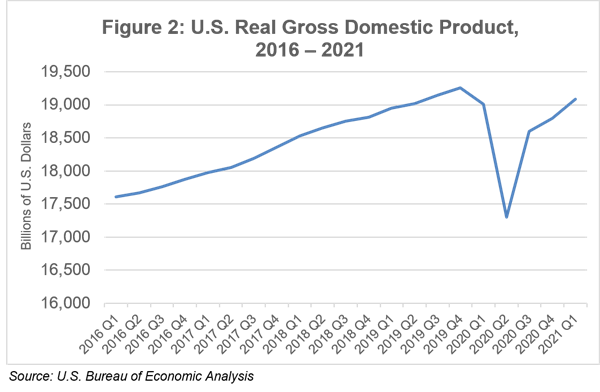 Is the U.S. economy overheating? It’s hard to tell at this point. Overall U.S. economic activity remains below levels we’ve seen before, but conditions are highly variable from one industry sector to the next.

What’s particularly notable are the product shortages and capacity constraints in some industries. Many commodities have significantly increased in value over the last year, with significant price inflation for some goods.

This raises the specter of inflation, which is indeed a concern — although again — it’s highly specific, with some products costing a lot more, while others remain flat.

The consumer price index (CPI) showed an increase of 4.2% in April 2021 compared to April 2020, the largest 12-month increase since September 2008. However, there is a lot of unpack in that statistic. A significant portion of the increase was due to a 25% increase in energy prices from April 2020. This is largely due to what is called a “base effect.” In other words, it’s not so much because energy costs are high now, as much as it’s because they were abnormally low in April 2020, the trough of the COVID-19 recession. U.S. crude oil is currently at $66.24/bbl., still well below prices seen from 2011-2014. Whereas in April 2020, crude was trading from $9-19/bbl., and even briefly went negative for a period of time in futures markets. So, it’s important to consider the comparison points when we consider year-over-year changes. Figure 3 shows the decline in the CPI for March through May of 2020. 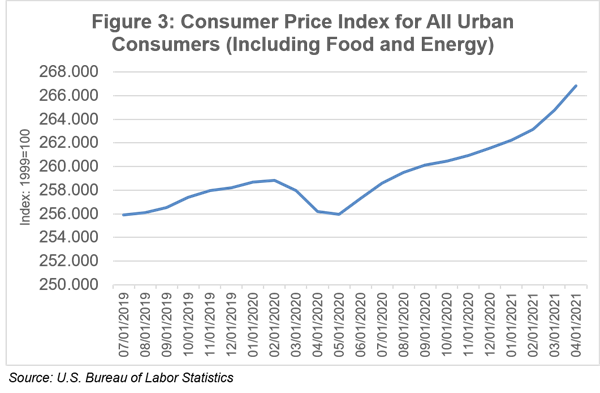 Still, base effects aside, there are clear signs that costs are rising, some dramatically so. Anecdotally, we hear that businesses are paying more for everything from hired labor to packaging to building materials. These increases are compounded by supply chain problems limiting the supply of everything from computer chips, gasoline and lumber to chicken wings, plastics and fertilizer. Some of these price increases and supply shortages are artifacts of the pandemic: Just as businesses struggled when demand fell sharply in the early stages of COVID-19 shutdowns, so too are they struggling to return to “normal” as demand resurges and the economy regains its footing after a year of reduced demand. Businesses are replacing laid-off workers, rebuilding inventories, and restoring output to pre-COVID levels.

Significant price increases over last year aren’t surprising. The real test will be whether the rate of inflation we are currently seeing is sustained over the remainder of 2021. Economists differ in their forecasts: The Federal Reserve, while it is watching inflation closely, sees still-elevated unemployment as a sign that the economy is not overheating. Fed governor Christopher Waller said in a May speech, “The May and June jobs report may reveal that April was an outlier, but we need to see that first before we start thinking about adjusting our policy stance. We also need to see if the unusually high price pressures we saw in the April CPI report will persist in the months ahead.”2

The opinions of Fed leadership matter a great deal. Their policies have held interest rates near zero and greatly expanded the money supply over the past year in an effort to support the economic recovery from the pandemic recession.

Other analysts disagree, suggesting we are at a turning point with the significant monetary and fiscal stimulus of the recent past combining with pent-up demand from consumers and businesses to overheat the economy, causing a level of inflation we haven’t seen in a long time. A survey of manufacturers from the Federal Reserve Bank of Philadelphia found that companies in its region saw widespread price increases for both manufacturing inputs and the companies’ own finished products. More than three-quarters of firms reported price increases, while none reported decreases. The firms’ median forecast for prices was for an increase of 5.0%, an increase from 3.0% when asked the same question in February.3

Whatever the case may be, all eyes are on the U.S. Federal Reserve as they face a rising challenge: How to continue their aggressive monetary policy to promote returning U.S. employment to pre-pandemic levels, while simultaneously keeping inflation under control. Low inflation over the past 30 years, even given significant monetary stimulus at various times, has convinced many that the Fed can continue low rates without spurring inflation. But some fear a worst-case scenario where we experience both inflation and sluggish hiring: Economic data from April 2021 showed both slowing job growth and rising prices — not the results economists hoped to see.

All-in-all, we will have to wait and see whether the current rate of price increases will be sustained, or whether this inflationary trend is temporary, and one which will subside once the economy gets back to pre-COVID levels.