One of the major factors affecting the U.S. economy today is inflation. As the economy has rebounded from the COVID-19-induced contraction of 2020, businesses have struggled to restore capacity fast enough to handle the surge in demand. This, coupled with aggressive stimulus actions by the U.S. federal government, led to a situation of demand outpacing capacity, and subsequently rising inflation. The U.S. consumer price index (CPI) increased by 8.5% in March for the preceding 12 months, the greatest increase since December 1981. A major driver of inflation has been energy costs, which have increased by 32.0% from one year ago. Increases in other product and service categories vary widely, although nearly all have increased to some extent.1

A major driver of price increases and capacity constraints across the U.S. economy has been the supply and cost of labor. With the supply of workers limited, labor costs have increased. The Employment Cost Index for private industry workers increased by 4.0% in 2021, the largest increase since 2004. Lower-wage occupations saw greater increases than the average of all workers, as companies have particularly struggled to staff entry-level and service positions.2  It is likely that upward pressure on wages and limited supply of job seekers will continue for the foreseeable future. 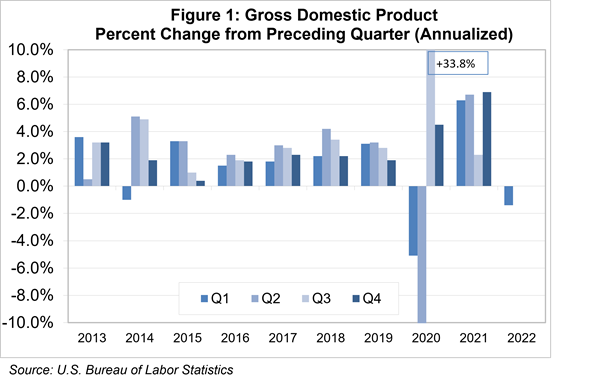 A key factor affecting the economy will be the Federal Reserve’s response to these circumstances. The Federal Reserve’s stated goals are to promote maximum employment and price stability, which translates into a long-term inflation target of 2% per year. With unemployment nearing all-time lows at 3.6% as of March, and inflation well above the Fed’s target, they have begun to take steps to cool inflationary pressure by tapering bond-buying and increasing the Federal Funds Rate. At their March meeting, the Federal Reserve Open Market Committee announced a 25 basis-point increase in interest rates, the first of several anticipated over the next 12 months. The speed at which these increases may be implemented will depend on both inflation and unemployment indicators, but it appears likely we will see a prime interest rate above 4.00% by the end of the year.

What will the rest of the year bring? There is significant uncertainty in the economic forecast. Beyond the unclear path of the war in Ukraine, there are major unknowns regarding the actions of the Fed, as well as energy and agricultural markets. However, indications suggest that the U.S. economy is slowing down, as evidenced by the Q1 2022 GDP growth of -1.4%. While this showed a modest contraction in the U.S. economy, the underlying components of it show that it may not be quite as bad as it looks at first glance.

The major components of the Q1 GDP figure that caused it to show a contraction were; the sell-off of excess inventories by businesses, a decline in government spending, and a reduction in net exports, as imports from overseas surged. However, these were partially offset by a significant increase in consumer spending and private investment which remain strong. Taken together, the net takeaway is that the speed of U.S. economic growth is tapering. And that will take some of the inflationary pressure off consumer prices.

The impact of certain factors remains unclear. Energy markets, for example, are a major wildcard as prior to the Ukraine war, forecasts suggested that oil prices had peaked, and would slowly decline over the next year. But the embargo on Russian energy will likely keep energy prices high until the conflict is resolved. Another significant factor affecting inflation is the red-hot U.S. labor market. High levels of employment support household income and consumer spending, while simultaneously putting pressure on labor costs for businesses and pushing prices upward. With unemployment remarkably low, and job openings far exceeding job seekers, it may take significant increases in interest rates by the Fed to slow inflation.

The bottom line is that the next nine months will likely bring slower economic growth at home and abroad. We should also see the rate of inflation slow as well, however, which will fall first, and how far, remains a question mark. An optimistic scenario would be for U.S. GDP growth to come in around 2.0% for 2022 – solid but not excessive, and for inflation to follow suit down to perhaps 3-4%. A more pessimistic outlook would be flat or slightly negative U.S. economic growth, while inflation, pressured by energy prices, stays above Fed targets. We will continue to monitor economic results to see which scenario comes to pass.

Knowledge Exchange Partner
Inflation and Snarled Supply Chains: Is There Relief in Sight?