Agriculture in the Digital Age 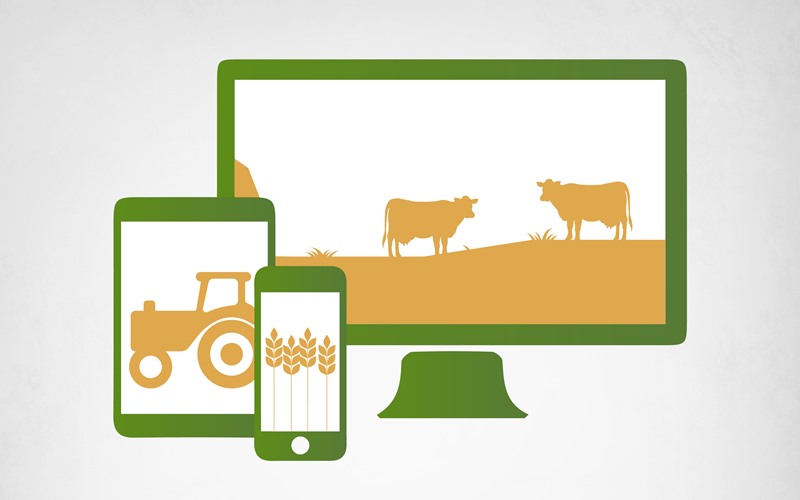 If you don’t own a smartphone, you’re in the minority. According to the Pew Research Center, only 35 percent of adults owned a smartphone in 2011. Today, roughly 77 percent of Americans own a smartphone, and when zeroing in on the young adult population, more than 90 percent own smartphones. This demonstrates the growing use of technology in our lives, and how quickly adoption is becoming the norm.

Just as technology’s adoption has been on the rise for the American population, our nation’s farmers have also been adopting technology to enhance efficiency and productivity on their farms. Technology is allowing farmers to keep track of the health of their dairy cows, plant crops more efficiently and keep up-to-date on the latest industry-specific information. Let’s take a look at some of the ways progressive farmers have been adopting technology to improve their operations.

The popularity of activity monitors has been growing among health-conscious Americans as an easy way to keep track of calories burned, miles covered, steps taken, active minutes, heart rate and more. Many of today’s cows wear a similar device. Sophisticated collars or ear tags are monitoring cow’s body behavior, such as activity, body temperature and how much milk they produce.

Farmers invest in this technology to track the health of their animals. The monitors can even be used to detect if a cow isn’t feeling well; since she can’t tell us herself, the farmer or veterinarian can be on-site to offer the treatment that’s needed.

The race for approval of self-driving cars has been top of the headlines in recent years. This technology’s goal is to help improve safety and reduce commuter stress. But when it comes to agriculture, tractors have been driving themselves for years.

A study by Purdue University found that over 50 percent of farms use auto-steer technology and that number is predicted to rise to 64 percent by 2018. These autonomous tractors have been carefully refined… so carefully that they are planted and fertilized within an inch of their target using GPS technology – a method known as “precision agriculture.”

These technological improvements continue to provide farmers with greater yields per acre as fertilizer and water is applied in the precise amount needed. In addition, the GPS is able to find the most efficient route from one side of a thousand acre field to another, thereby helping to reduce greenhouse gas emissions and save on fuel.

There’s an App for Everything… Including in Agriculture

Farmers’ smartphone adoption is transitioning from the conservative, “Do I really need a smartphone?” to “How did I ever farm without one?!”

Their use on dairy farms has enabled producers to view current and historical data by herd or by individual cow to help make decisions. There are also apps to help farmers calculate, on the spot, how much milk income they receive per cow per day and subtract feed cost per cow per day. This important measure helps farmers better understand their feeds, and find places where they can reduce costs to improve profits.

There are ag market apps, enabling farmers to follow, in real-time, ag commodity prices and futures quotes. There are also apps for pests, which provide a library of weeds and insects, allowing farmers to easily identify pests in the field. There are other apps that give insight into wind speed and direction.

Other apps are hooked up to a farm or greenhouse’s irrigation system, so that farmers can easily turn on or off the irrigation system with the click of a button to better control moisture and humidity. To further monitor growing conditions, many greenhouse apps also measure light and temperature, alerting growers when they might want to open roof vents or roll up the shades. The apps will also let you know if there’s a power outage or a system isn’t working properly.

Finally, let’s not forget the all-important weather. Weather is a tremendous and unpredictable factor in the world of farming. Apps providing down-to-the-minute rain predictions, weather radar, and even soil moisture, temperature and dewpoint are an instant resource for making decisions.

So, just as technology is growing among the American population, its use is also growing in agriculture. While technology isn’t cheap, farmers are finding that the investment helps them to better manage their land and crops, and can also help them to save money in the long run.