The National Economy and the Impact of the War in Ukraine

With GDP growth of 5.7%, 2021 marked a very strong year for the U.S. economy. This was the highest growth rate seen since 1984. That rapid growth, however, has brought inflation and supply chain issues.

As the economy has rebounded from the COVID-19-induced contraction of 2020, firms have struggled to restore capacity fast enough to handle the surge in demand. This, coupled with aggressive stimulus actions by the U.S. federal government led to a situation of demand outpacing capacity, and subsequently rising inflation. The U.S. consumer price index (CPI) increased by 8.5% in March for the preceding 12 months. A major driver of inflation has been energy costs, which have increased by 32.0% from one year ago. Increases in other product and service categories vary widely, although nearly all have increased to some extent1.

While we were experiencing significant inflation prior to the Russian invasion of Ukraine, the war has exacerbated the situation, with particular impacts for energy, grains and oilseeds, and fertilizer markets.

Beyond the war’s direct disruption to Ukraine’s shipping ports and other transportation facilities, there are significant spillover effects in two major areas: The economic sanctions placed on Russia by Western governments, and the logistical hurdles of getting cargo in and out of a disputed region, even if the products are not embargoed. Put another way: Even if there are willing buyers and sellers for Russian wheat or fertilizer, what shipping companies would be willing to send their vessel into a war zone to pick up the product?

In the fertilizer market, Russia is a major player. In terms of nitrogen, Russia is the fourth-largest producer in the world, and the largest exporter, accounting for 14% of urea exports and 23% of ammonia exports. There are likely to be major ripple effects as well: The country is the world’s top exporter of natural gas, which is used to make nitrogenous fertilizers, and the surge in gas prices across Europe has already caused Norway’s Yara, one of the world’s largest fertilizer makers to curtail production in several EU plants, further tightening supplies. In potash, Russia is responsible for 21% of global exports. Together with Belarus, a key Russian ally likely to also face Western sanctions, they supply more than 40% of the global potash market. The bottom line is that we can expect tight fertilizer supplies along with high prices for at least the next year.

In terms of agricultural products, here too, we are seeing major disruptions. Put together, Russia and Ukraine’s production totals about one-quarter of global wheat exports, and 17% of global corn exports. In both cases a significant minority share of global markets, but certainly enough to have major price impacts in world markets. In sunflower and safflower seeds and oils, the two countries supply the majority of the global market. Thus the Ukraine conflict is likely to support high commodity prices in U.S. markets. For more, see our recent Knowledge Exchange Partner article, “The Impact of the War in Ukraine on the U.S. Agricultural Economy”.

Pivoting back to domestic concerns, another driver of price increases and capacity constraints across the U.S. economy has been the supply and cost of labor. With the supply of workers limited, labor costs have increased. The Employment Cost Index for private industry workers increased by 4.0% in 2021, the largest increase since 2004. Lower-wage occupations saw greater increases than the average of all workers, as companies have particularly struggled to staff entry-level and service positions2. It is likely that upward pressure on wages and limited supply of job seekers will continue for the foreseeable future.

A key factor affecting the economy will be the Federal Reserve’s response to these circumstances. The Federal Reserve’s stated goals are to promote maximum employment and price stability, which translates into a long-term inflation target of 2% per year. With unemployment nearing all-time lows at 3.6%, as of March, and inflation well above the Fed’s target, they have begun to take steps to cool inflationary pressure by tapering bond-buying and increasing the Federal Funds Rate. At their March meeting, the Federal Reserve Open Market Committee announced a 25 basis-point increase in interest rates, the first of several anticipated over the next 12 months. The speed at which these increases may be implemented will depend on both inflation and unemployment indicators, but it appears likely we will see a prime interest rate around 4.00% by the end of the year. 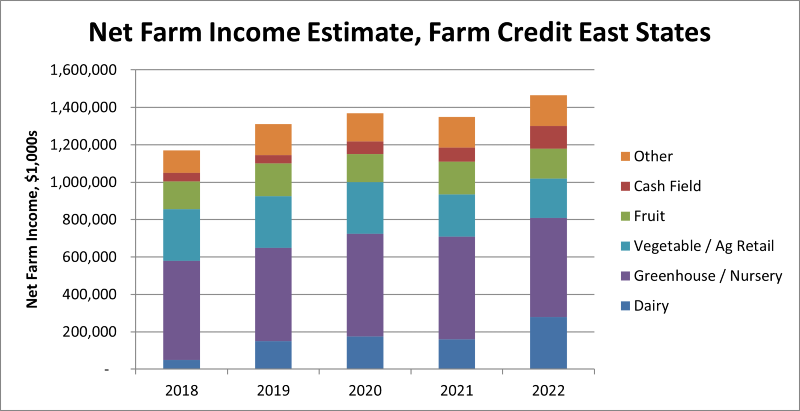 Business has generally been good for most Northeast agricultural producers, with consumer markets doing well, and many commodity prices rising, but there are significant concerns related to inputs, both in terms of cost and supply shortages. As discussed in the National Economy section, inflation has risen as economic activity increases domestically and around the globe.

The costs of inputs, equipment, labor, and construction have soared this year, and availability is tight for many products and services, with shortages common. We are seeing supply chains gradually normalize and anticipate that shortage issues will decline in severity over the course of 2022, but the price increases we have seen in costs of raw materials are likely here to stay.

Real estate markets for both farmland and residential properties have been extremely tight recently, with the inventory of properties for sale extremely low, and many parcels selling at or above asking price within days of hitting the market.