The Impact of the War in Ukraine on the U.S. Agricultural Economy

Impact of the War in Ukraine

The Impact of the War in Ukraine on the U.S. Agricultural Economy

Russia’s brazen invasion of Ukraine has obvious and significant effects on global geopolitics, as well as tremendous humanitarian impacts on the Ukrainian population as they withstand bombardment from the Russian military.

This military action will also have impacts on the U.S. agricultural economy, given the region’s agricultural and fertilizer production. Since Russia invaded the country on February 24, activity at Ukraine’s Black Sea shipping ports has largely ceased, bringing almost all exports of fertilizer and agricultural products from the region to a halt.

About twice the size of California, or slightly smaller than Texas, and blessed with fertile soils and a favorable climate, Ukraine is a major player in global agriculture. Russia is also a major player, and while the conflict is occurring in Ukraine, the war in the region, as well as the Western response to it, is already causing severe disruption to global supply chains in agriculture, energy and other basic materials, such as metals.

Beyond the war’s direct disruption to Ukraine’s shipping ports and other transportation facilities, there are significant spillover effects in two major areas: the economic sanctions placed on Russia by Western governments, and the logistical hurdles of getting cargo in and out of a disputed region, even if the products are not embargoed. Put another way, even if there are willing buyers and sellers for Russian wheat or fertilizer, what shipping companies would be willing to send their vessel into a war zone to pick up the product?

In the fertilizer market, Russia is a major player. In terms of nitrogen, Russia is the fourth-largest producer in the world, and the largest exporter, accounting for 14% of urea exports and 23% of ammonia exports. There are likely to be major ripple effects as well; the country is the world’s top exporter of natural gas, which is used to make nitrogenous fertilizers, and the surge in gas prices across Europe has already caused Norway’s Yara, one of the world’s largest fertilizer makers, to curtail production in several EU plants, further tightening supplies. Russia is also responsible for 21% of global potash exports. Together with Belarus, a key Russian ally facing Western sanctions, they supply more than 40% of the global potash market.

Figure 3 shows the CME Futures contract for the April 2022 delivery of Diammonium Phosphate fertilizer (DAP) to the FOB Port of New Orleans. Note the tremendous surge in price in March as a result of the war in Ukraine. The market price for DAP increased by 39% from its already-elevated levels prior to the invasion. This is more than three times the market price in July 2020. 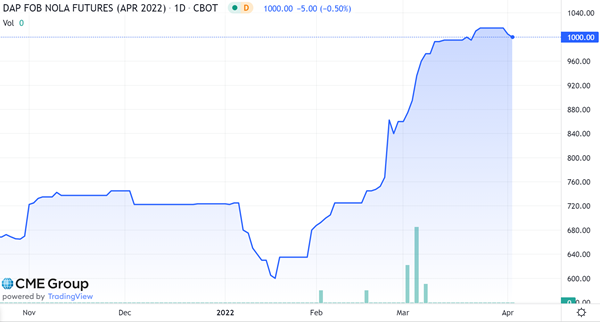 The world is also seeing major disruptions in terms of agricultural products. Both Russian and Ukrainian production are likely to face export roadblocks for different reasons: Ukraine’s production is likely to be held back because of the direct impacts of the war, while Russian production is likely to be embargoed by Western nations. The total of Russia and Ukraine’s combined production amounts to about one-quarter of global wheat exports, and 17% of global corn exports. In both cases, their production is a minority share of global markets, but certainly enough to have major price impacts in world markets as shown in Figures 4 and 5. In sunflower and safflower seeds and oils, the two countries supply the majority of the global market.

These impacts could be prolonged. While the short-term impacts of grain transport are immediate and severe, longer-term crop production in Ukraine is likely to be hampered, at least for the current growing season. It’s now the beginning of planting season in Ukraine and Ukraine’s farmers, if they are not otherwise occupied supporting the war effort or fleeing with their families, will face major challenges trying to get crops in the ground. As a result, there will likely be a major decline in planted acreage. Depending on the duration of active military operations in the region, crop maintenance and harvests may be impacted as well. Even when the war winds down, Ukrainian farmers will have to cope with damaged infrastructure and equipment, supply shortages and high input costs.1 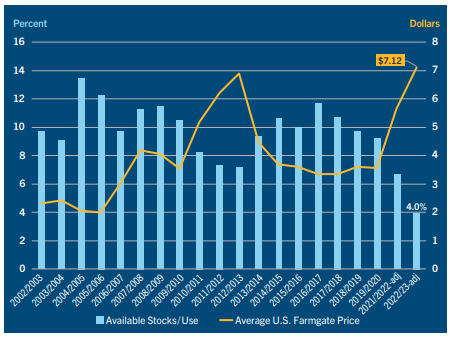 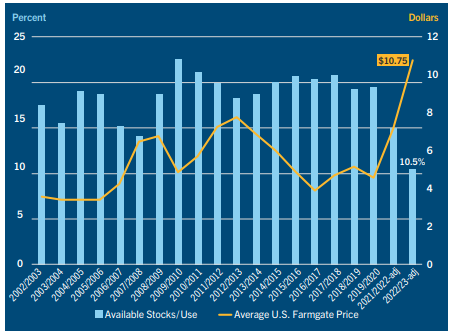 A further consideration of the impact of shortfalls in Black Sea grain exports is where that grain goes – a large portion of it is typically shipped to the Middle East and North Africa (MENA) region. For countries like Turkey, Egypt and Tunisia, Black Sea imports make up the majority of their wheat supplies. If we recall the “Arab Spring” demonstrations of 2011-2012, a major driver of the unrest was rising food prices. While issues such as human rights violations, political corruption and endemic poverty had been simmering for some time, many blame increases in grain and other food prices with sparking the uprisings. It is a possibility that a new surge in food prices could lead to destabilization in some vulnerable MENA countries and increased food insecurity in sub-Saharan Africa.

In conclusion, the War in Ukraine, aside from having a tremendous human cost, is contributing to significantly higher prices for fertilizer, wheat, sunflower oil, and to a lesser extent, corn. While it is impossible at this juncture to predict the path of the conflict, we are likely to see major disruptions to global grain and fertilizer markets for at least two growing seasons, and possibly longer. Higher prices for these commodities are likely to be accompanied by increased volatility in global and U.S. domestic markets, making price risk management strategies essential.

Ag Economy
The Lobster Industry in 2022